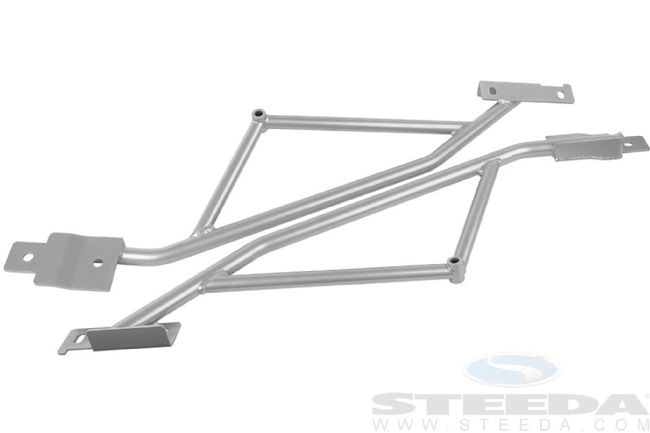 With the release of the new S550 Mustang, Steeda realized that addressing the IRS system would be a top priority. Being the first production Mustang with an IRS since the 2003-2004 Cobra’s, Steeda knew there would be a great opportunity to capitalize on Ford’s latest piece by giving it the Steeda advantage.

As with any suspension system, deflection is an issue if it’s present. Anytime a piece is moving, twisting or vibrating when it should be stationary is a major problem. One of the areas team Steeda wanted to focus on was the rear IRS subframe.

Steeda’s IRS Subframe Support Brace is built in-house and constructed out of 4130 chrome-moly steel and powder coated silver metal flake, creating a strong component, all the while giving it a great look.

To get a better understanding of Steeda’s IRS Subframe Support System; it ties together three very important points on the S550 chassis. They utilized existing threaded holes in the rocker panel, which is the strongest part of the body; connecting that to the front mounting location of the IRS subframe and to the rear mount of the lower control arm and toe link.

Connecting these three points together not only adds rigidity that was lacking in the rear, but also provides more control of the entire vehicle. What helps Steeda’s kit stand out is that their setup supports that bracket while connecting to two additional locations, giving it added rigidity.

One of the best features of this this kit is that it uses the existing holes in the chassis, making it a simple bolt-on item. This also limits any undesirable modifications to the chassis and adds no NVH whatsoever.