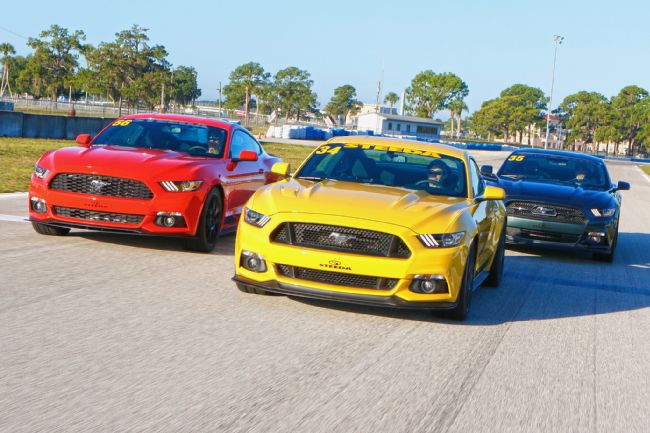 Track-Testing the 2015 Steeda Q650 Mustang at Sebring International Raceway
2015 Steeda Q650 Track Test: This Mustang eats up the track and leaves you plenty of performance for the street.

When it comes to Mustang performance, power and speed are everything. OK, looks are important too, but massive horsepower, a sharklike grip, and Formula 1-like braking are what enthusiasts crave. For over 25 years, Steeda Autosports has been giving Mustangs catlike reflexes by engineering high-quality performance parts to get them quicker lap times.

Steeda is also known for its package Mustangs. Recently we drove the new 2015 Q650 at the famed Sebring International Raceway. We met up with Steeda Autosports for the 14th Annual Track Guys Performance Driving Event Sebring Sensation, where Steeda’s president, Dario Orlando, tossed us the keys to his latest Pony. 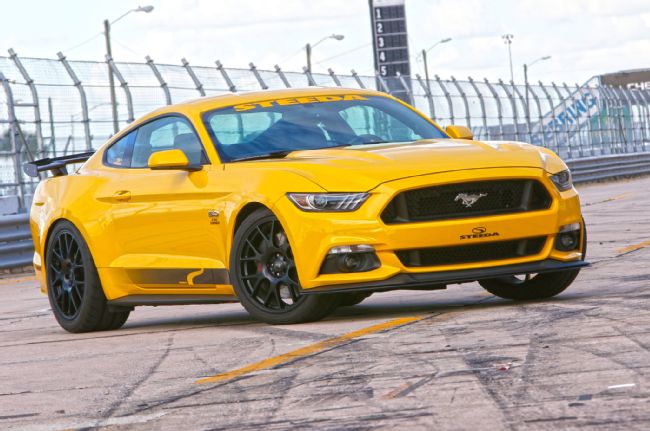 “Our objective with the Q650 and our Q-series of Mustangs is to build a track-ready car that outperforms much more expensive cars for far less money,” said Orlando. “We manufacture and sell our own parts so you can purchase a complete car with the Steeda package installed, or add the parts to your existing Mustang. For the 2015, we first built a mockup of the front and rear suspensions. This allowed us to analyze the suspension arrangement and note the areas of concern as they relate to high performance. We’re looking to satisfy the performance-minded enthusiasts who wants a fast, capable street car that is ready for the track.” I was anxious to attack the limits. 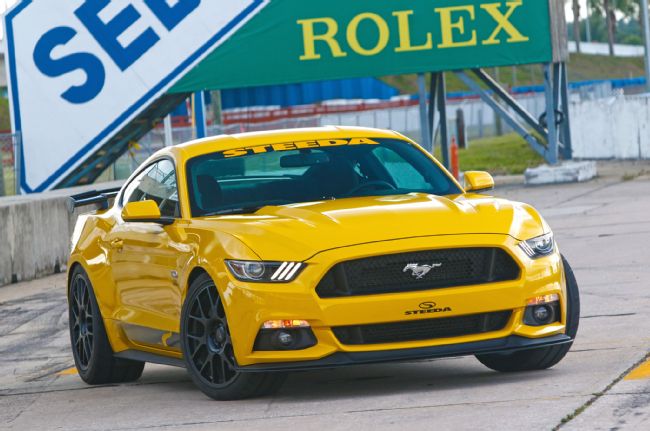 Sebring is a wonderful place to drive a Mustang. It presents a mix of straights and corners—its imperfect concrete surface exposes any driver or mechanical weaknesses. The full course is 3.74 miles of worn-out concrete that blossomed from Hendricks Army Air Field in the 1940s, where B-17 and B-24 crews trained for WWII. While flat, those linked slabs and the joints connecting them create a jarring effect. In addition, many of the braking zones and corners are slathered with tar sealer. The layout and surface make it a challenge to maintain compliance and speed on this historic and fun track.

Straight away we noticed the 2015 Steeda Q650 was more composed than the 2014 Q650. Exiting Turn 17, which leads to the front-straight, we poured the coals to the Vortech V3-blown 5.0 and the Coyote responded with a whoosh of power. We blasted past the start/finish line at 120-plus mph heading towards the difficult Turn 1.

We drove in deep, laid into the Brembo brakes (which were enhanced with Steeda slotted rotors and Carbotech race pads), and downshifted to Fourth gear. Man, those brakes are nice! They modulated nicely and had a firm feel. We killed enough speed to cut in towards the apex, and the Steeda G-Trac suspension kept the Mustang flat and controlled. The front is modified from stock with a Steeda adjustable front sway bar with billet endlinks, progressive-rate sport springs, upper strut mount, Extreme G-Trac brace, and Steeda strut tower brace.

Still in Turn 1, we eased the Mustang towards the inside wall, nipped the apex, and in a continuous motion unwound the wheel to let the Mustang drift out. We were carrying a great deal of speed, but there was no drama, even as we flew over the dips on the corner exit. Power on—aim for Turn 2.

“When we first set the car up it was understeering a touch,” said Orlando. “So we adjusted the sway bars and gave the car to Evan. The Q650 is still new, and we’re always working and testing to make the package better.”

The adjustment was spot on. The Q650 was balanced and neutral-feeling (meaning there was no abundance of understeer or oversteer). Clearly the 2015 S550 chassis works. To be frank, there’s a huge difference in the dynamics between the 2005-2014 S197 Mustangs and the 2015 S550. Amazingly, they both give you that Mustang feel; however, the S550 is refined and composed, but not at all sterile. 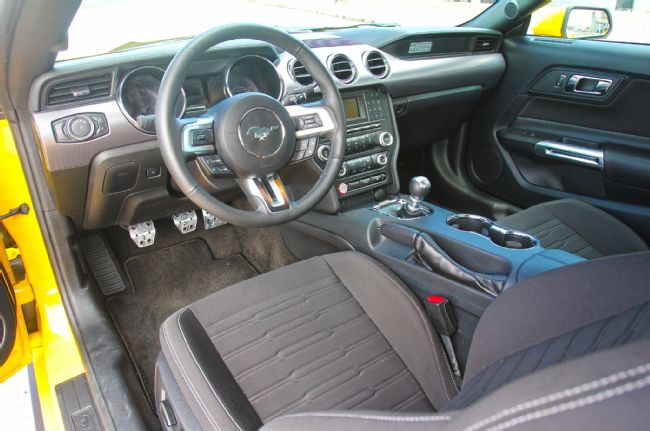 Turns 2 through 5 are a series of slower switchback corners that are really fun, especially when you’re on line. We purposely used the raised inside corner curbing in this section, and the Q650 ate ’em up. Exiting Turn 5 we blasted towards the Hotel turn, which is a supertight right-hander. Though the braking zone is straight, there’s a lot of sealer and we were carrying big speed in Fifth gear. We put the brakes to the test and were welcomed with controlled, flat deceleration. At this point we had to remind ourselves that we were driving a Mustang with A/C, stereo, and a multitude of safety and creature comforts. The performance, feel, and sound of the Q650 makes you feel like you’re wheeling a purebred race car.

After only a few laps we noticed three distinct things. First, the Steeda was amazing under braking. Second, it rotated into the corner precisely and with little to no body roll. Finally, its best attribute may be during corner exit, as it stays smooth and controlled over rumble strips that looked like gator teeth.

When you brake, the entire car plants, giving each contact patch more grip. This extra traction lets you turn in more aggressively and carry more speed through the corner. In live-axle Mustangs you can expect the nose to dive and the rear to get jacked up under aggressive braking. This upsets the balance and makes the car nervous. With the Steeda-enhanced IRS, the back was calm and no extra steering input was required. 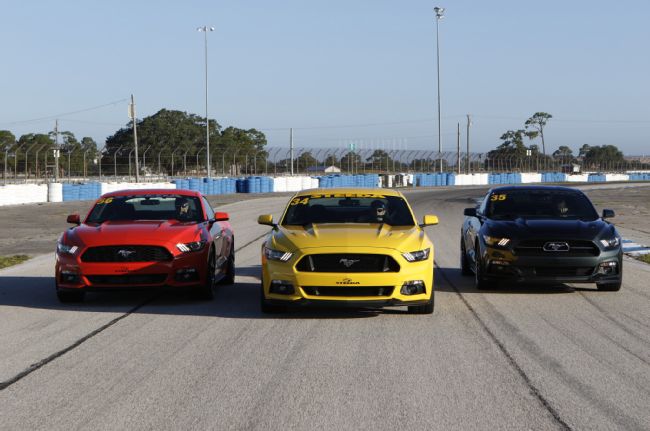 With the Mustang slowed, we picked our point and took a late apex through the Hotel turn (Turn 7) and went power-on through 8 and 9, two sweeping corners that set you up for Turn 10. At 10 we buried the brake, slowed, and dove into the tight right-hander. The Steeda Q650 just follows along. It gives you confidence because it’s predictable and has excellent balance. 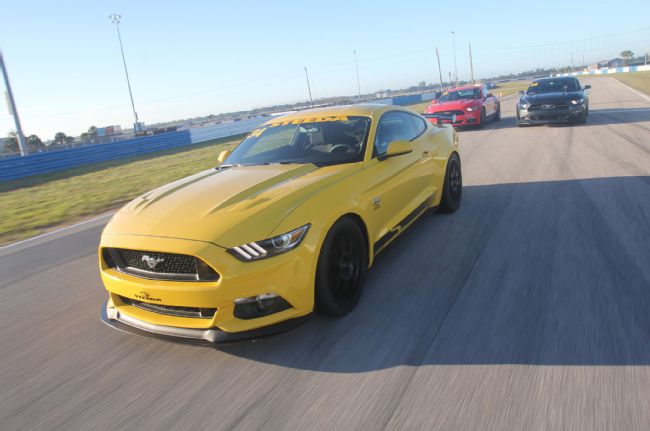 Turn 11 is an off-camber sweeping left. It’s kind of blind, and we always feel like we’ll fly off the track if we aren’t careful. We breathed the throttle even though we knew we had grip, and we still went faster than we ever had before in a street-legal Mustang.

We like 12 and 13, a kink followed by a hard right that has a wide exit. We exercised patience, turned in late, and put the pedal to the mat really early. We expected the tail to kick out, but it just gripped and off it went. In NASCAR that’s called “forward bite,” and the Steeda has plenty.

Turn 14 is very much like 11, so we were cautious. But in Turn 15 we went all out, diving in late and getting set up for 16 and the long back straight. The sharp gator’s-teeth rumble strips in 15 and 16 were no problem—we hit them full on and rolled the throttle wide open just after diving into 16. We rowed the Tri-Ax shifter into Fifth gear and ran past 140 mph as we approached the treacherous Turn 17, the bumpiest corner on the course. Turn 17 gets the attention of even the most skilled drivers. It links the two biggest straights, and it’s important to be fast if you want a good lap time. The corner and the bumps never seem to end, and you must get back to the gas long before you can see the corner exit. Furthermore, the line exiting aims you straight at the outside retaining wall. Lift? No way. We let the Mustang track all the way out so we could straighten the exit, and that helps build speed. 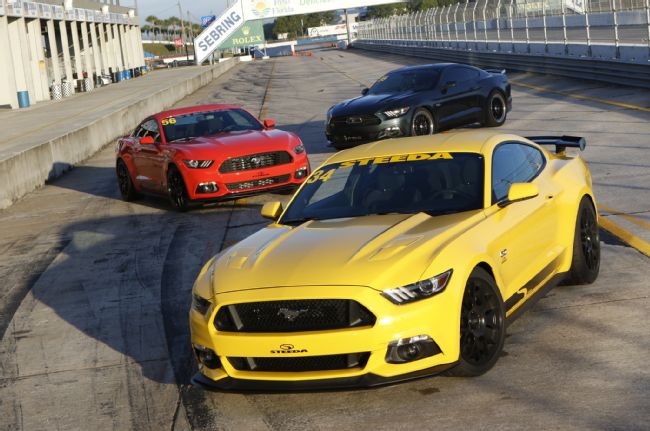 “We do a lot of slalom and skidpad testing before we ever go to the track,” says Orlando. “Once we feel the package is close, we’ll do road course and sometimes drag testing to dial in the car to our specifications. For instance, with the 2015, there is noticeable movement in the rear bushings, but this is done purposely by Ford to control NVH and to give the Mustang good ride quality. To satisfy the niche market, we engineer parts to eliminate softness and add control for the person who wants a fun car that can perform on track and beat exotic cars that cost way more.”

The Steeda was amazingly fast around Sebring. We enjoyed every moment behind the wheel. Dario Orlando and his team produced a Q650 Mustang that provides a track-car feel in a package that’s nice to drive on the street. Of course, Orlando mentioned he was working on a 700hp calibration, so we think we’ll have to get back to Sebring and bring you another report. 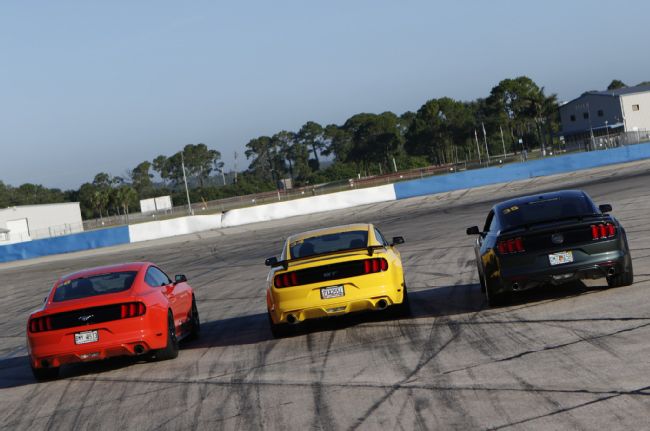