Open the hood and there is the familiar whir of ProCharger gear drive under the hood of a 5.0-liter Mustang. Close the hood and there is but a hint of the sound. When cruising around, you might not know it was there until you jab your right foot to the floorboard and the rpm soars. There the high-winding boost and the free-revving Coyote join in a symphony of horsepower.

Supercharged Mustangs are nothing new, but buying them right from a dealership with an aftermarket supercharger is a relatively modern concept, which is often reserved for factory-endorsed, positive displacement superchargers. There is, however, a dealer out there that lets you add a ProCharger and other aftermarket upgrades, roll that gear into the financing and back up the resulting vehicle with its own three-year, 36,000-mile warranty.

That dealer is Sarasota Ford and these modded Mustangs are produced by its in-house 707 Performance division.

“Our goal was to try and target more open markets and try to be competitive, like Galpin Autosports, where we can have a custom car built from the ground up at the dealership that compete with an aftermarket car…” Kevin Wisneski said. “We have expanded exponentially to the point where I am really starting to feel like we are making a name out there. We can offer Floridians in the Sarasota area the chance to own a 700-horsepower car for around $50,000…”

We made the drive down to sample one of the Mustangs, a white 2016 Mustang GT Premium with a nice selection of modifications, highlighted by the Stage 2 ProCharger system, Steeda springs, Velgen wheels, Nitto tires and a Magnaflow/Mustang RTR cat-back exhaust. It was, however, the addition of the ProCharger that we found most intriguing about this dealer package.

“I read up on the ProCharger kit for the new Mustang, and I felt like, what if people changed their opinions on the new 5.0s. The old 4.6s had no torque, so they needed a Roots-style blower. These cars make so much power up at the top end—that’s what they are made for—basically after you get out of first gear, you are in the boost…” he explained. “This is more usable horsepower where you need it and where you want it.”

“When a dealership is looking to install an aftermarket part, they want it to be as ‘OEM’ as it can be. That way they can count on the product performing like it should every single time, to eliminate headaches down the road,” Erik Radzins social media and tuning guru at ProCharger added. “This is not only the hardware, but also the computer software tuning they receive as well. ProCharger goes above and beyond to make sure our hardware works with each model year and transmission combos.”

We are quite familiar with the installation of the ProCharger system but this marked our first time behind the wheel of an S550 with an intercooled centrifugal. Kevin opted for this blower because of its tractable, consistent power delivery and we have to say that after driving the car around for the better part of a smoldering Florida day that the power was consistently available once the rpm began to climb.

“When you are a tech at a OEM dealership, you cringe when you hear the word ‘aftermarket,’ since usually that means nothing is going to fit or go right,” Erik said. “However, again just as Sarasota has found, ProCharger makes sure to include everything in one box, down to the tuning and full color instructions. This system (like many of ours) is very easy to install with just a few hand tools. Install time for an average DIY person could be 5-8 hours.”

“I personally own one and I have never seen my car run hot. It runs exactly the same every time I start the car. When it’s 96 degrees outside, the IATs are showing with in five to six degrees of what it is outside. You can’t beat that,” Kevin added. “We felt like going after something that we could offer a customer that drives the exact same that a stock car would. The power is there when you want it but it would be docile enough for everyday use and can do the same consistent thing every time.”

To hear more from Kevin, you can watch our in-car interview here…

Another facet of the 707 Performance Mustangs that sets them apart from the more common tuner Mustang packages available nationwide is the flexibility of mods. Within reason you can choose the parts you want from its chosen vendors, so you can tweak exhaust, wheel and tire choices to your liking so the Mustang you drive off the lot is uniquely yours.

“There is no reason that you have to take this exact car the way it is. If you come in and you don’t like the wheels and tires that are on the car, we can put a different set on… If you want a different axle-back, a different front fascia or grille, whatever it is, we can go from there,” he said. “We have done a lot of cars where we start from scratch and just build a car to their liking. That is where I feel we are grabbing the best customers. We’ll get people to come in and they’ll give us a budget and they’ll say, ‘I want a 700-horsepower car, but I don’t need all the bells and whistles.’”

It sounds pretty great, but there is a small rub. You really need to be within reasonable driving distance of Sarasota Ford to take advantage of a 707 Performance Mustang with a full warranty. That’s because you must have your Mustang serviced at Sarasota Ford to retain that warranty.

“We will offer a three-year, 36,000-mile warranty with the ProCharger or pretty much anything, whether it’s an SCT tuner or a lift. The reason we are doing that is we have established such a good relationship with our vendors…” Kevin said. “You have to have the oil changed every 5,000 miles on the engine as well as the supercharger. You have to run 93 (octane). There are some guidelines that the customers have to follow.”

If you are in the area and are up for bringing your car in for maintenance, they throw in the ProCharger oil change with your service. In exchange you get a competent daily driver Mustang that is plenty fast, corners a bit sharper than a stocker and looks great. In traffic you forget you are driving a Mustang that puts down nearly 600 horsepower at the rear wheels, but when you get a chance to wind it out, the power urges you back in the seat and puts an ear-to-ear grin on your face.

“Customers that walk into a dealership and see a ProCharger-blown F-150 or Mustang, they know it makes power,” Erik said. “This gets people excited, and makes cars roll of the showroom floor, so really it’s good for everyone…”

We hope these sorts of packages catch on with more dealers, because it really is reassuring to drive a modded Mustang and know you won’t be on your own if something goes awry. 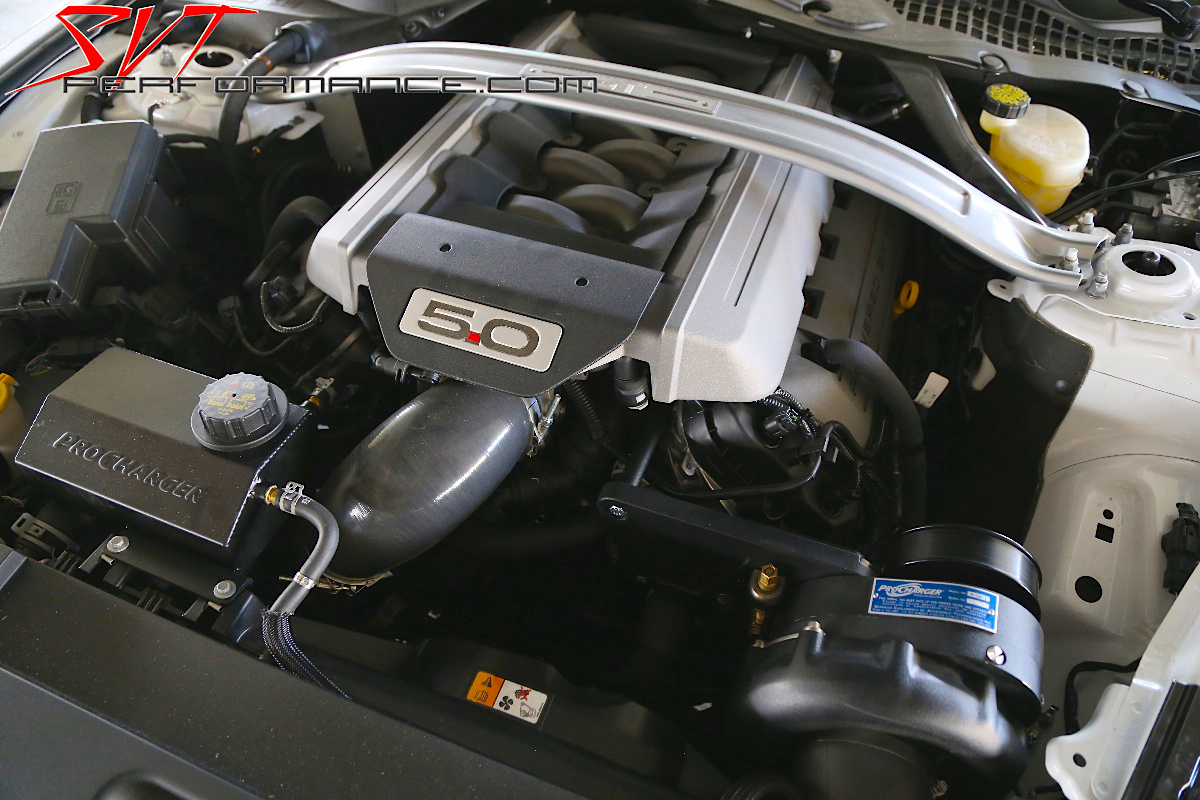 It’s not unusual to pop the hood of a 2015+ Mustang and see a supercharger lurking beneath. However, it is extremely rare to find a Stage 2 ProCharger bolted to one that you buy from a dealer, finance and retain a warranty. That’s just what Sarasota Ford’s 707 Performance Mustangs have to offer. 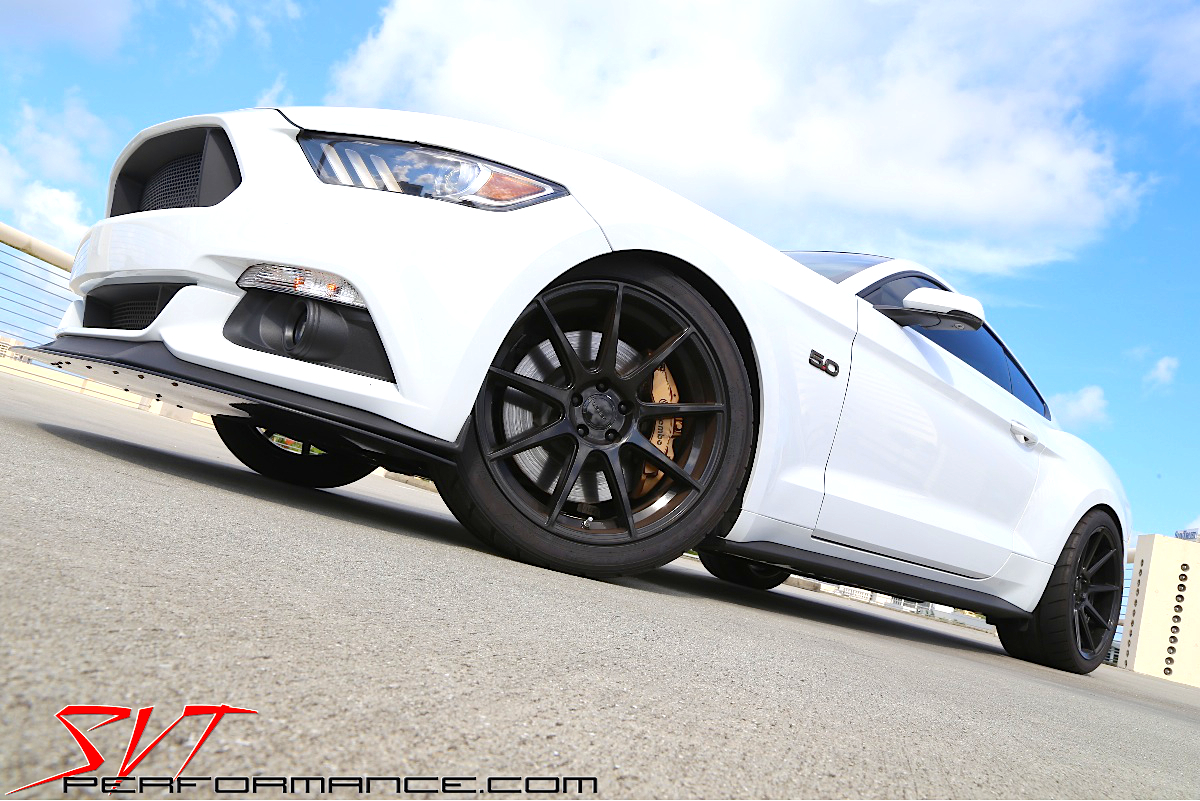 When it comes to the inherent beauty of the 2015+ Mustang the car doesn’t need many personalization mods to stand out. When it comes to the 707 Performance Mustangs, the options are customizable, but this particular model features Velgen VM89 wheels, blacked out emblems, custom-painted brake calipers and Mustang RTR front grilles. 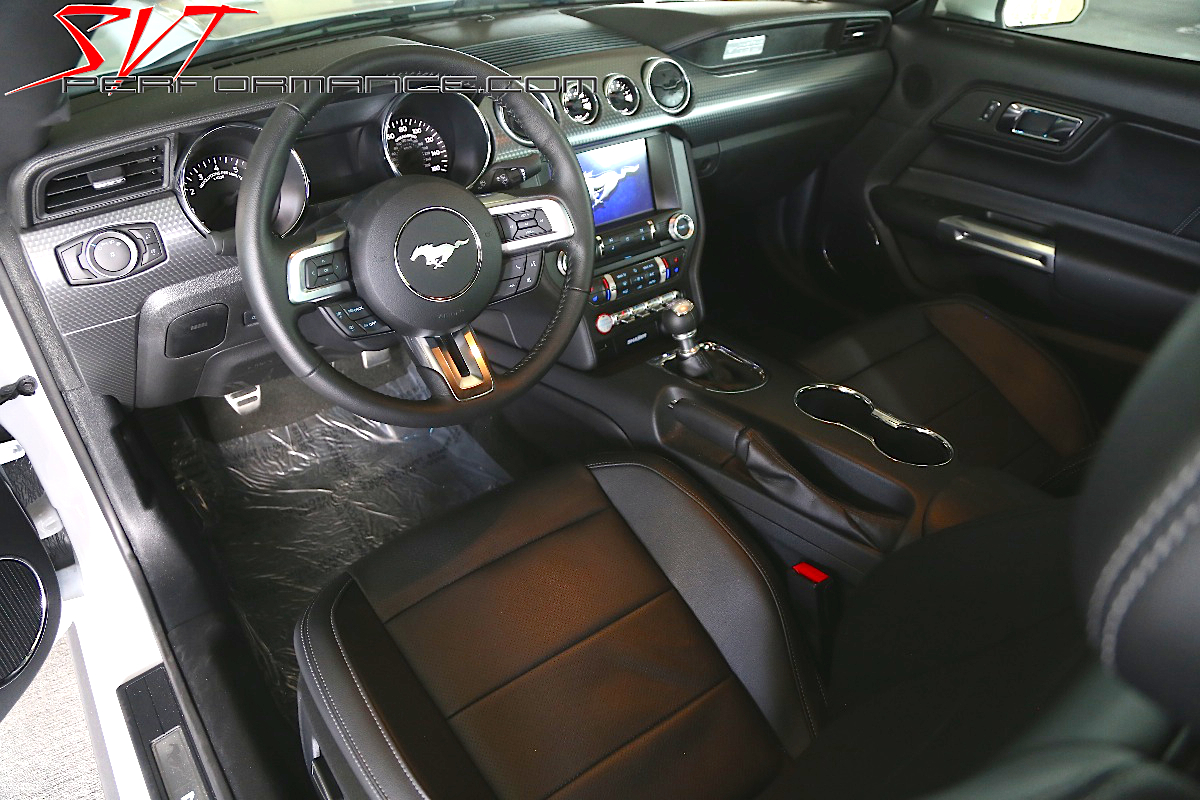 Inside this 2016 there isn’t a lot that needs improvement. This 2016 GT was nicely option but stock on the inside. 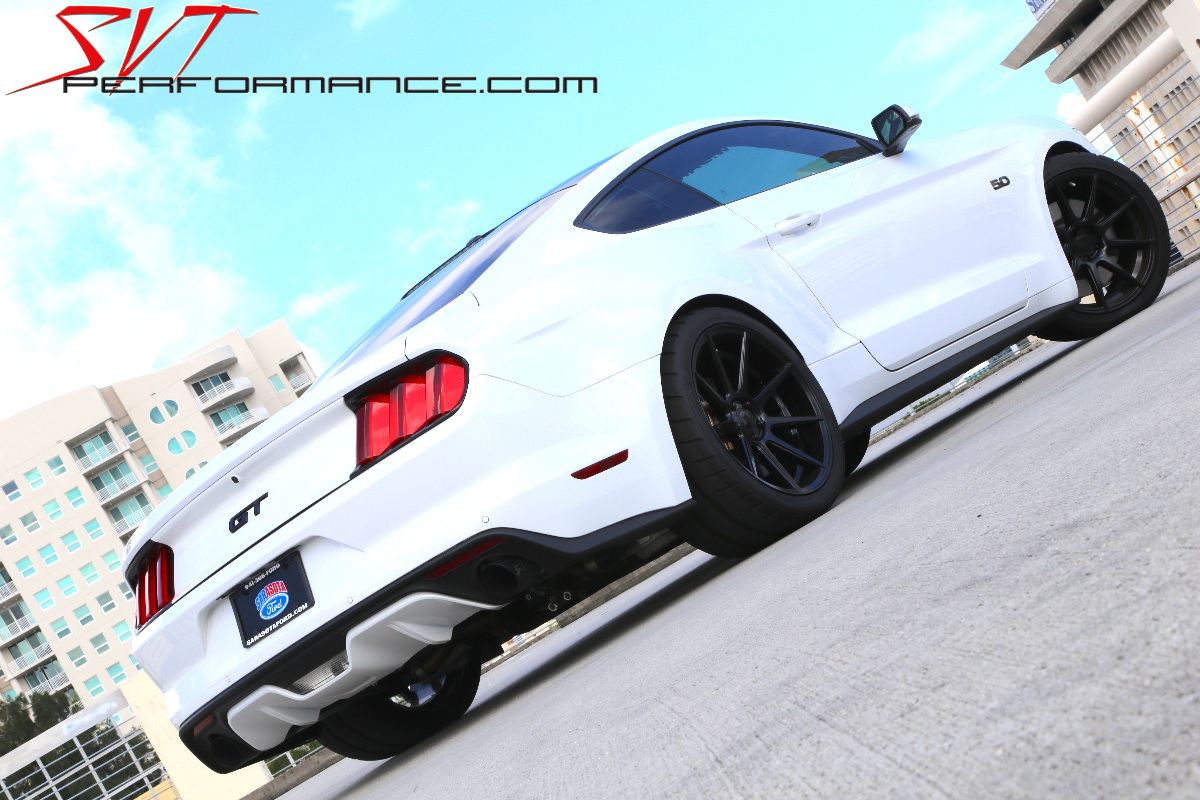 Lean and clean, the 707 Performance Mustang sits just right on Steeda Sport springs, which drop the ride height down and sharpen the handling. 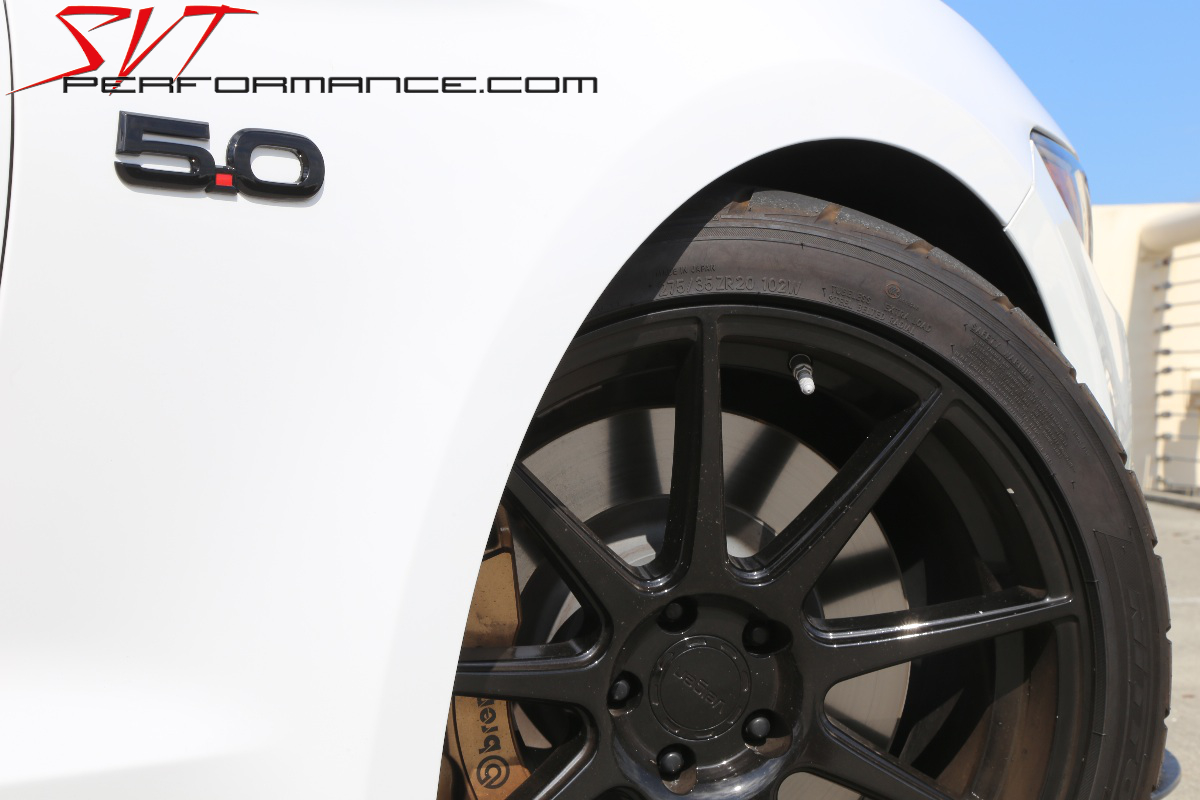 Velgen doesn’t offer these wheels in black, so 707 Performance paints them to deliver this look. They are accented by the gold-painted calipers and blacked-out emblems. 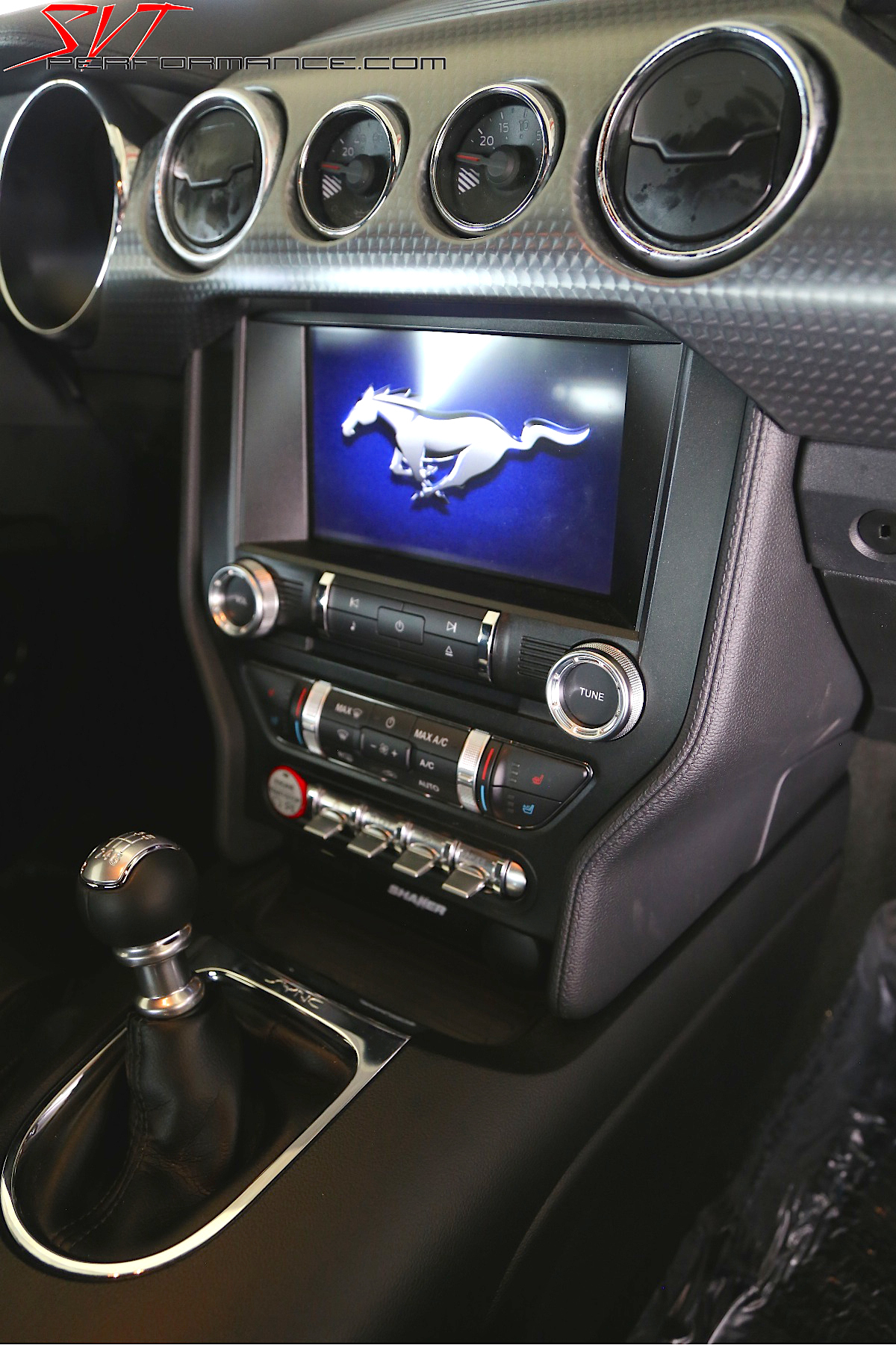 If we had one complaint about this particular 707 Performance Mustang it was the presence of the stock shifter. We are so spoiled by slamming gears with aftermarket shifters, the squishy long throw of the stocker felt out of place on a supercharged ’Stang. However, if you want a shifter, we’re sure you can add that option to the car. 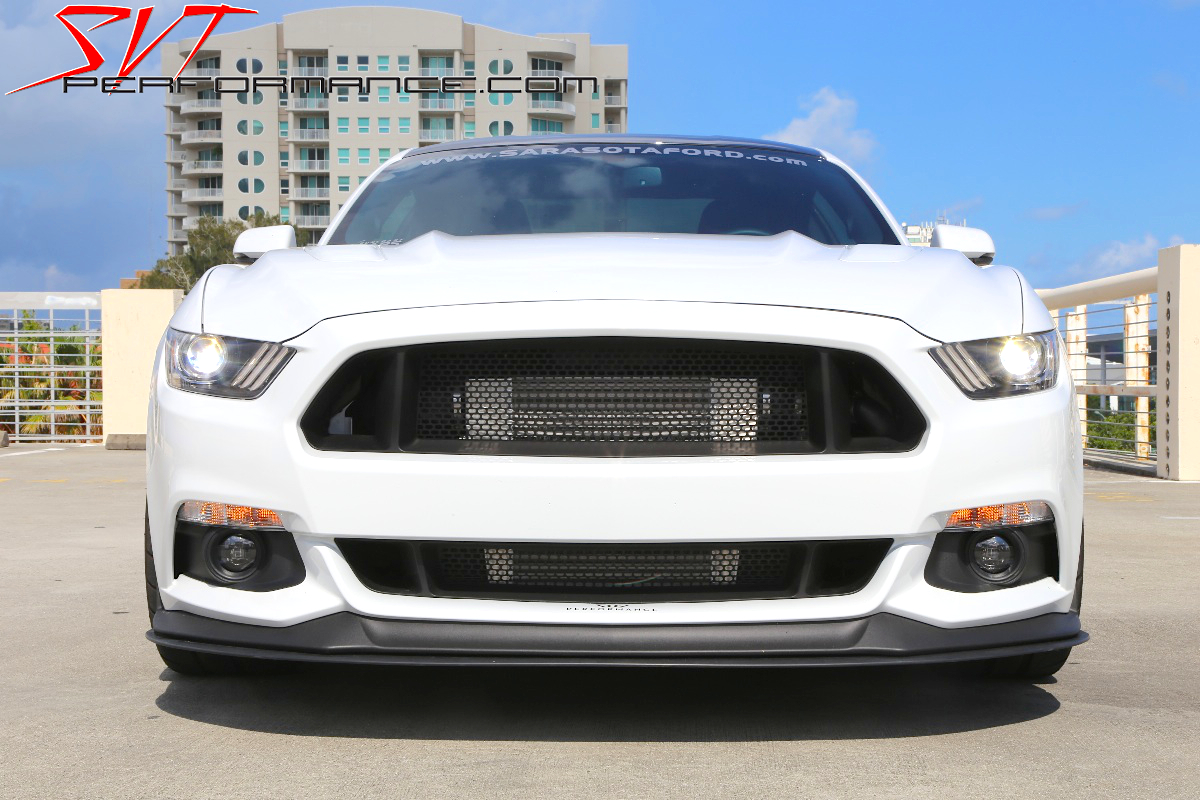 Delivering 9 pounds of boost, the ProCharger Stage 2 is highlighted by a dedicated eight-rib belt drive and a larger, 1,103-cubic-inch intercooler that 707 Performance’s Kevin Wisneski says does a stellar job taming air-charge temperatures in the Florida heat.