These days the automatic transmissions work so well that drivers who choose a manual transmission must really love that visceral connection between man and machine. There is nothing quite like the control and feel you get banging through the gears on your own, but more often than not the factory shifters are so dampened and isolated they rob you of some of that fun.

Though the stock shifters have gotten better over the years, the remote-linkage used on the MT-82 six-speed manual is designed to dampen and isolate that pesky noise, vibration and harshness that the OEs fight every days. It does that well, but that means it will move on its rubber mounts and give up some precision when shifted in anger.

For enthusiasts the shifter is something you really feel everyday, so upgrading to a more precise aftermarket unit is often high on the list of modifications. A company long associated with Mustang shifter upgrades is Steeda Autosport, which already offers a lever and support upgrade for the stock shifter mechanism. However, the company now offers a billet replacement shifter for the S550 MT-82.

“With the replacement of your factory shifter assembly with our short-throw shifter, you will notice a 30-percent reduction in throw between gears. Our shifter assembly will also lower the shift knob by 1 inch, putting it in a better power-shifting position,” says the product description. “Our Steeda S550 Mustang MT-82 Tri-Ax Race Short Throw Shifter is quieter than the stock shifter during daily driving, although during race applications you may notice a slight NVH increase.”

Since we got our eyes on the new Tri-Ax shifter (PN 555-7317; $439.95) we’ve been itching to document the installation process and see how it feels for ourselves. We recently did that, traveling to Steeda’s Pompano Beach, Florida, campus to snap the shutter as Steeda technician Steve Chichisola swapped out the shifters on Steeda main man Dario Orlando’s personal 2015 Mustang GT.

Shortly before our visit, the company also released its new 2015+ Mustang Clutch Assist Spring (PN 555-7022; $9.95), said to mitigate the vagaries of the stock clutch pedal feel, making it feel more linear. Also, the lighter spring rate still returns the clutch pedal to its stock height, ensuring the longevity of the factory slave cylinder.

We watched as Steve swapped out the springs as well. Then we jumped in the driver seat and took Dario’s red S5500 to lunch. We made sure to actuate the stock clutch and shifter before the swap. The latter had already been upgraded with Steeda’s lever, so it was already superior to the stock unit.

From the first depression of the clutch pedal, we could sense the change. The presence of the lighter Steeda assist spring meant the pedal effort was heightened. In trade, however, the application of the clutch felt more precise. It was almost like shifting with an old-fashioned cable-actuated clutch.

Likewise the Tri-Ax shifter takes a bit of adaptation. Its shorter height and tuned springs need a bit more torque for engagement than the stock mechanism, but when you get the opportunity to bang through the gears, the base is rock solid and the shifts are precise.

In all the combination of the Steeda Tri-Ax shifter and clutch-assist spring really elevates the performance feel of the shifting experience to the level an enthusiast expects. If that sounds good to you, keep reading as we hit the highlights of the installation process. 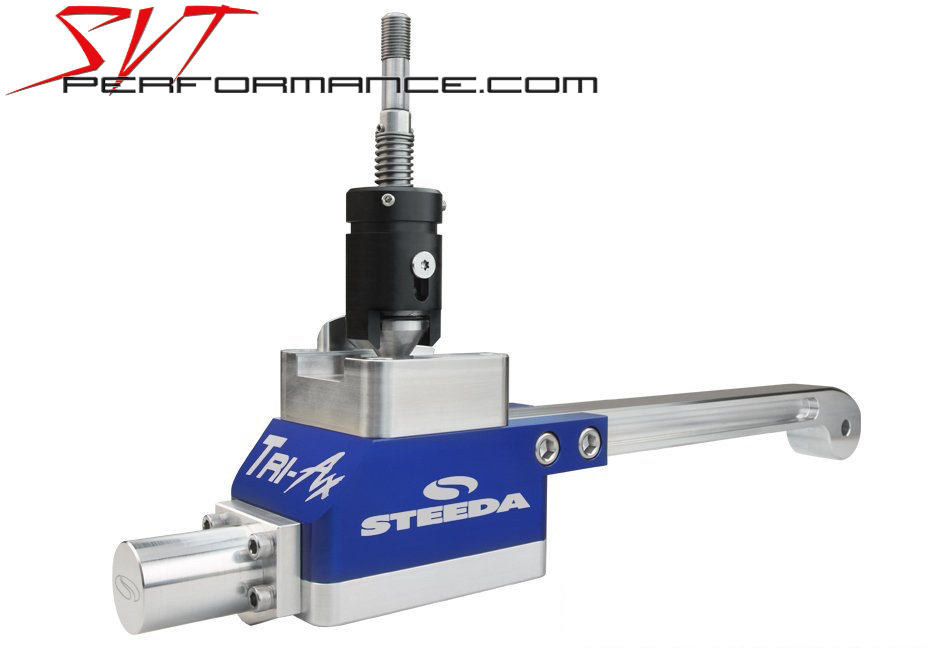 The new Steeda S550 Mustang MT-82 Tri-Ax Race Short Throw Shifter (PN 555-7317; $439.95) for 2015+ Mustang GTs offers a 30-percent reduction in shift throw. Its lever sits 1 inch lower than stock, which is said to place it the perfect power-shifting spot. Having driven a car so equipped, we will agree it feels good when you bang the gears. 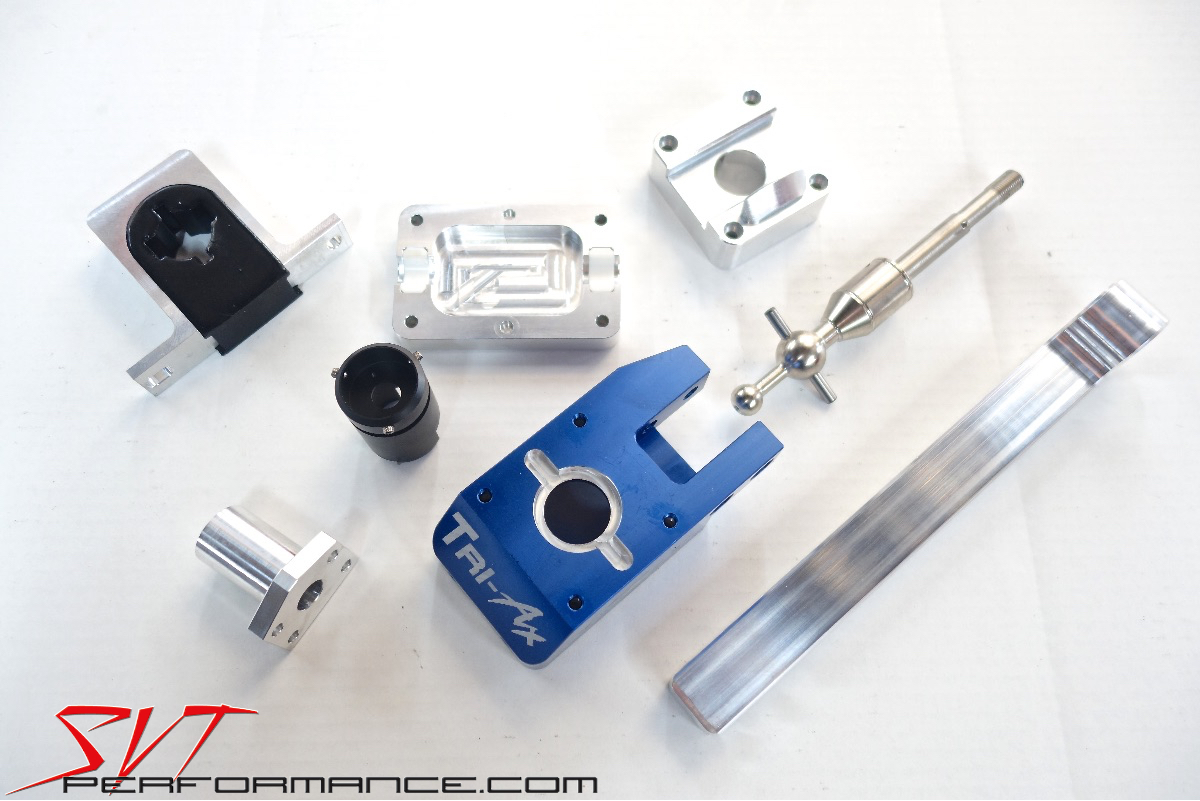 Because you will need to pirate a few pieces from the stock shifter and to ease its installation, the Steeda Tri-Ax arrives in need of assembly, but it’s a really straightforward process. 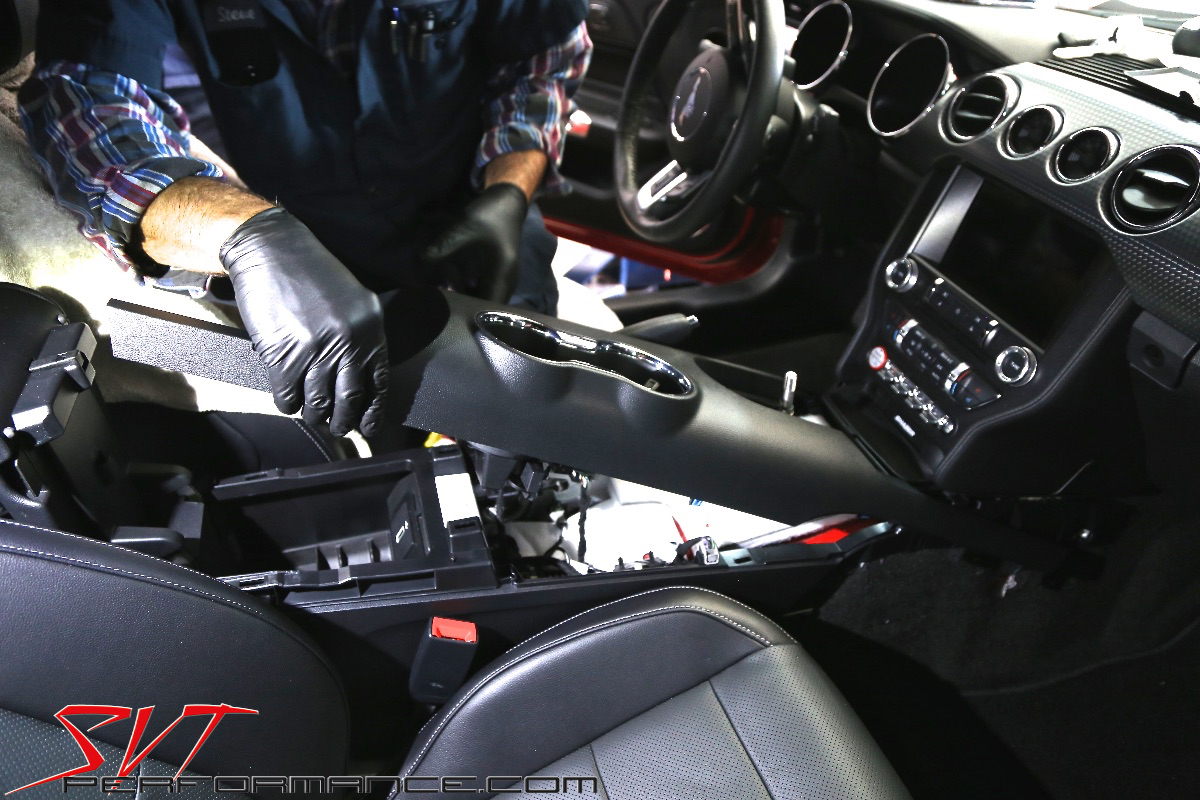 Get started by removing the console. You will need to remove a few fasteners at the base of the center stack and gently pry up on some clips inside the center console. Once it is free, you can disconnect the electrical connectors and use a screwdriver to release the clips holding the shift boot to the reverse lockout collar. Then you can remove the top of the console as Steve is doing here. From there you’ll need to push the pin out of the stock lever so you can remove the spring and unbolt the reverse lockout collar. For more details on that, you can check out our previous install story on Steeda’s lever upgrade, 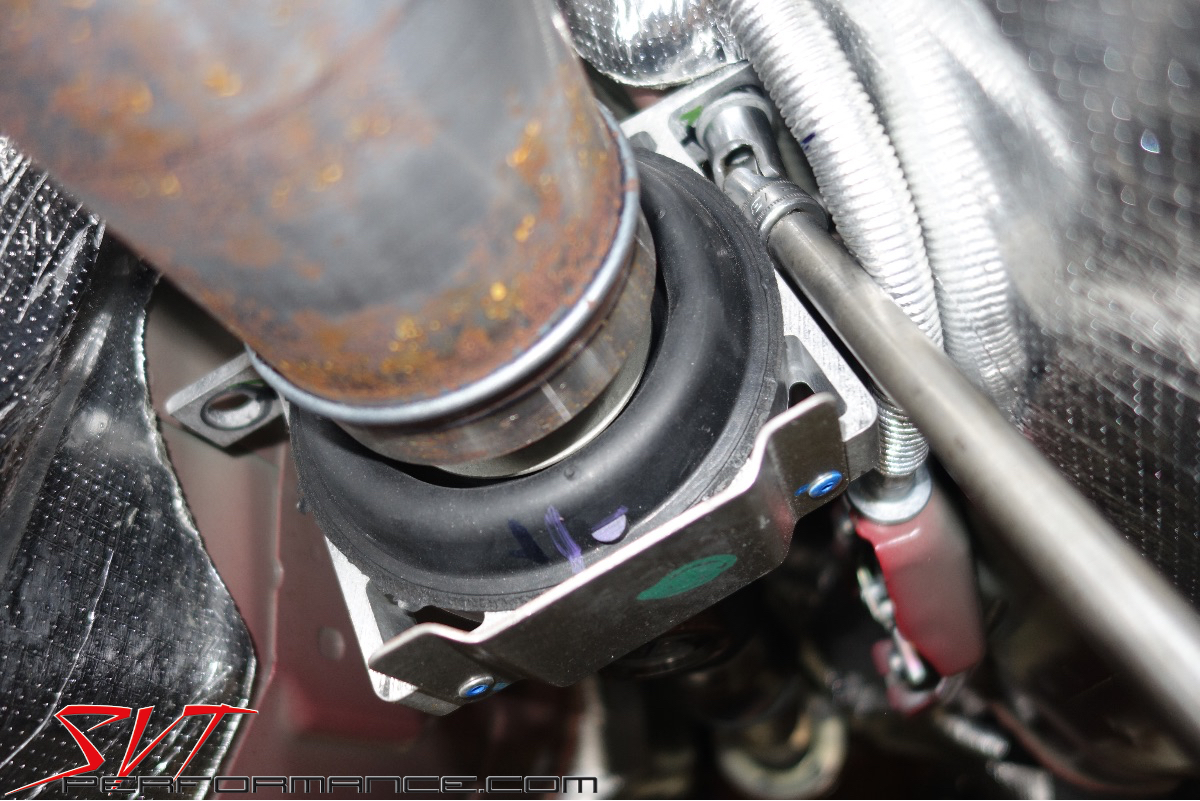 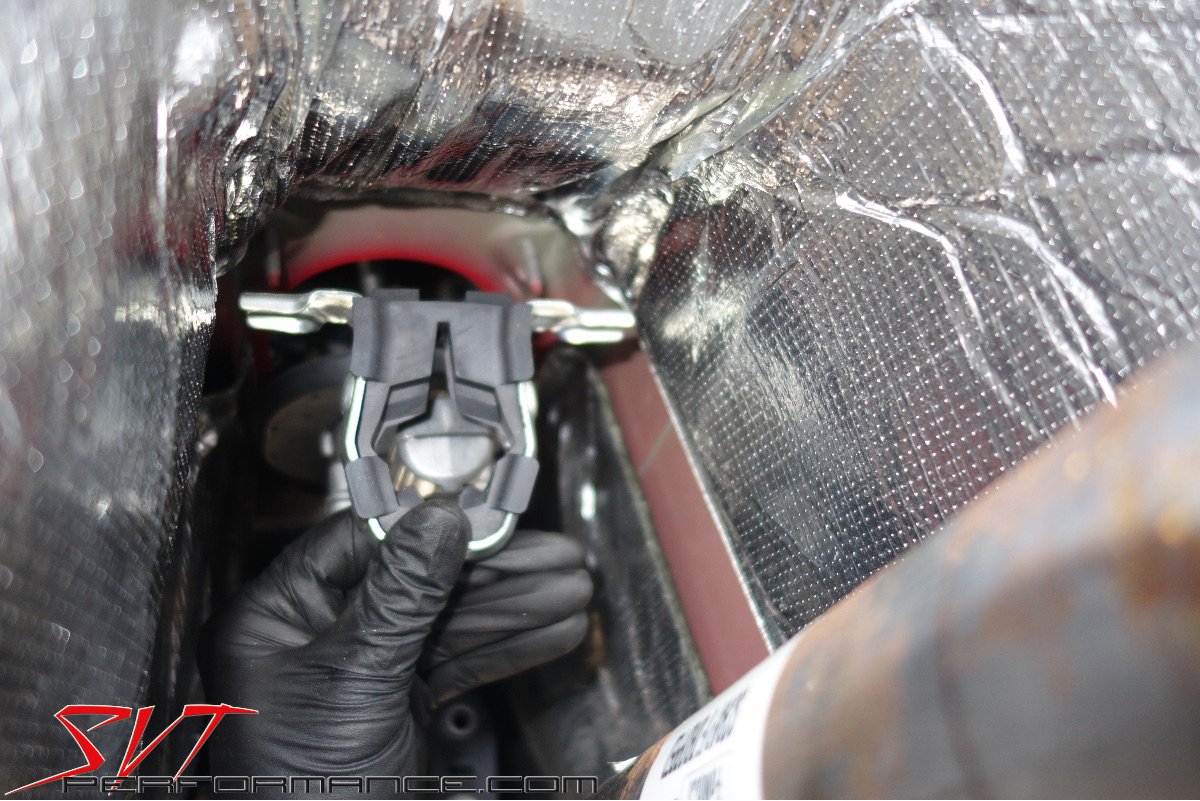 With the path clear, Steve can remove the fasteners and slide off the factory rear shifter support. 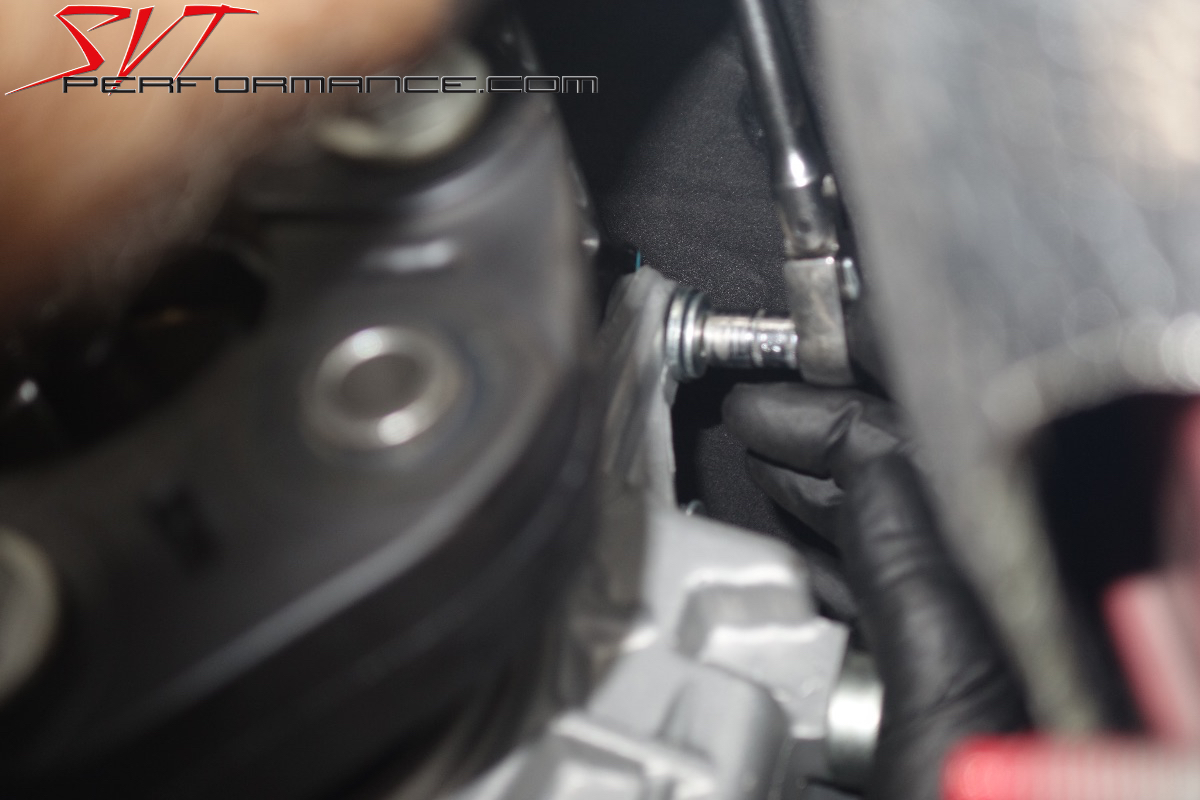 Next Steve slithers a 13mm ratchet and remove the fastener that retains the shifter to transmission. 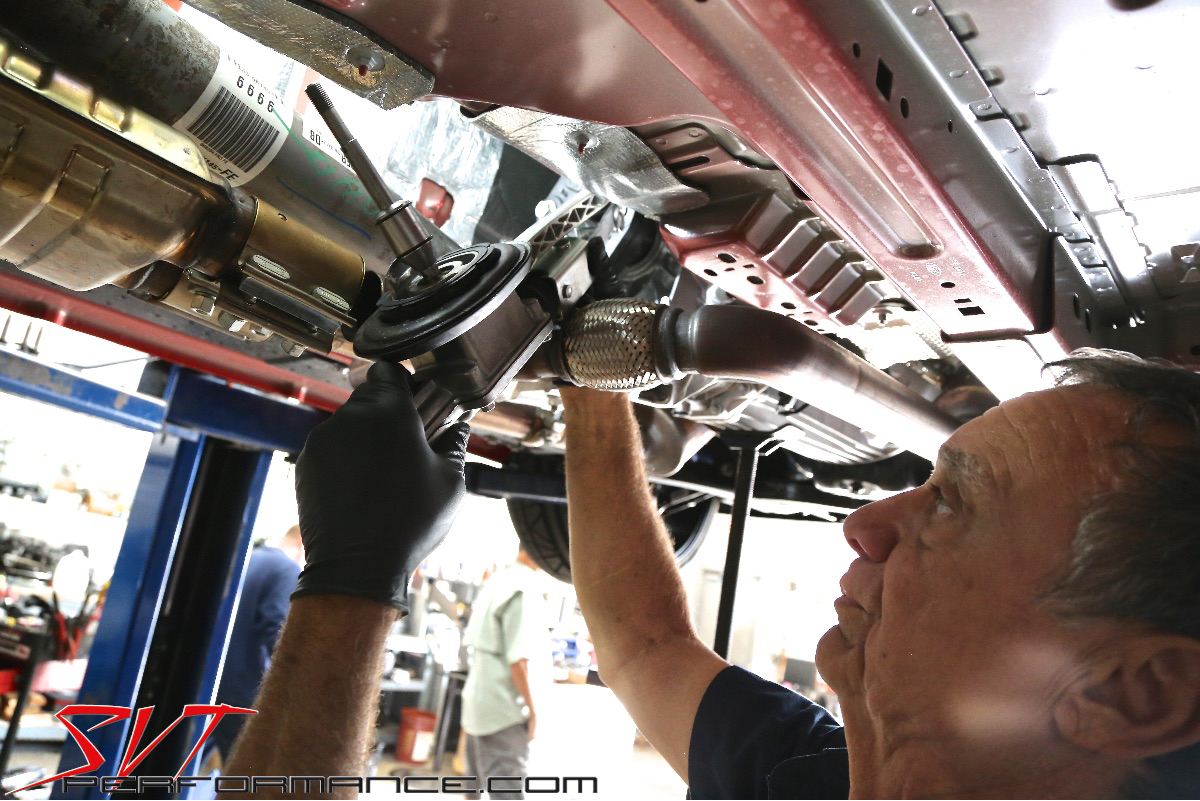 Steve slips the factory shifter out of the car so it can be dissected for a few key pieces. 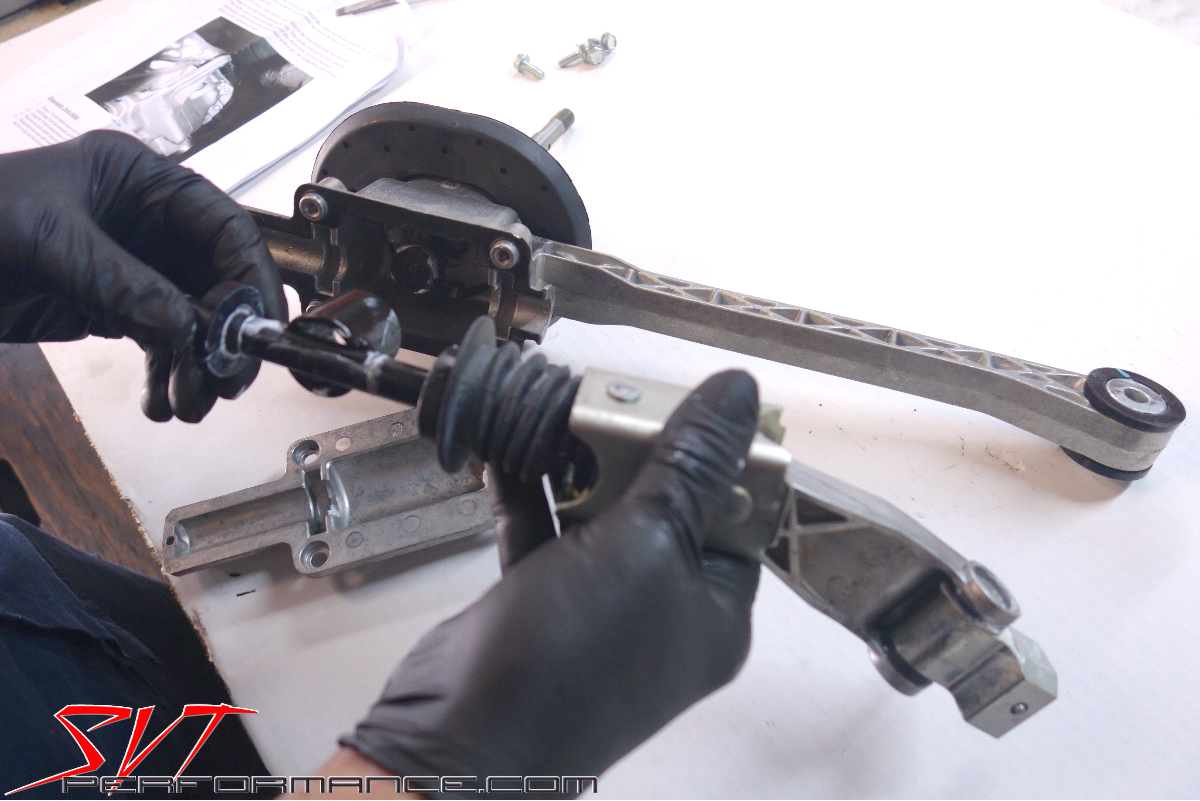 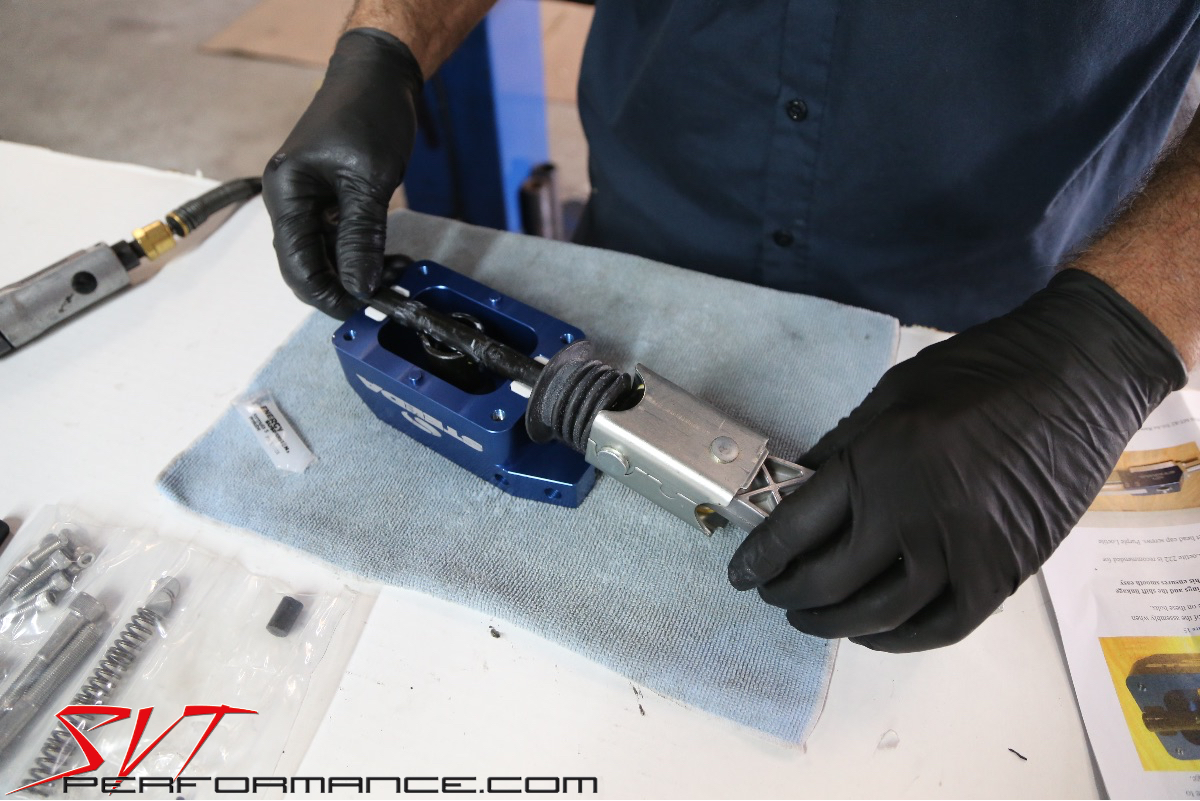 Steve lubricates the linkage with silicone grease and transfers it to the Steeda shifter base. 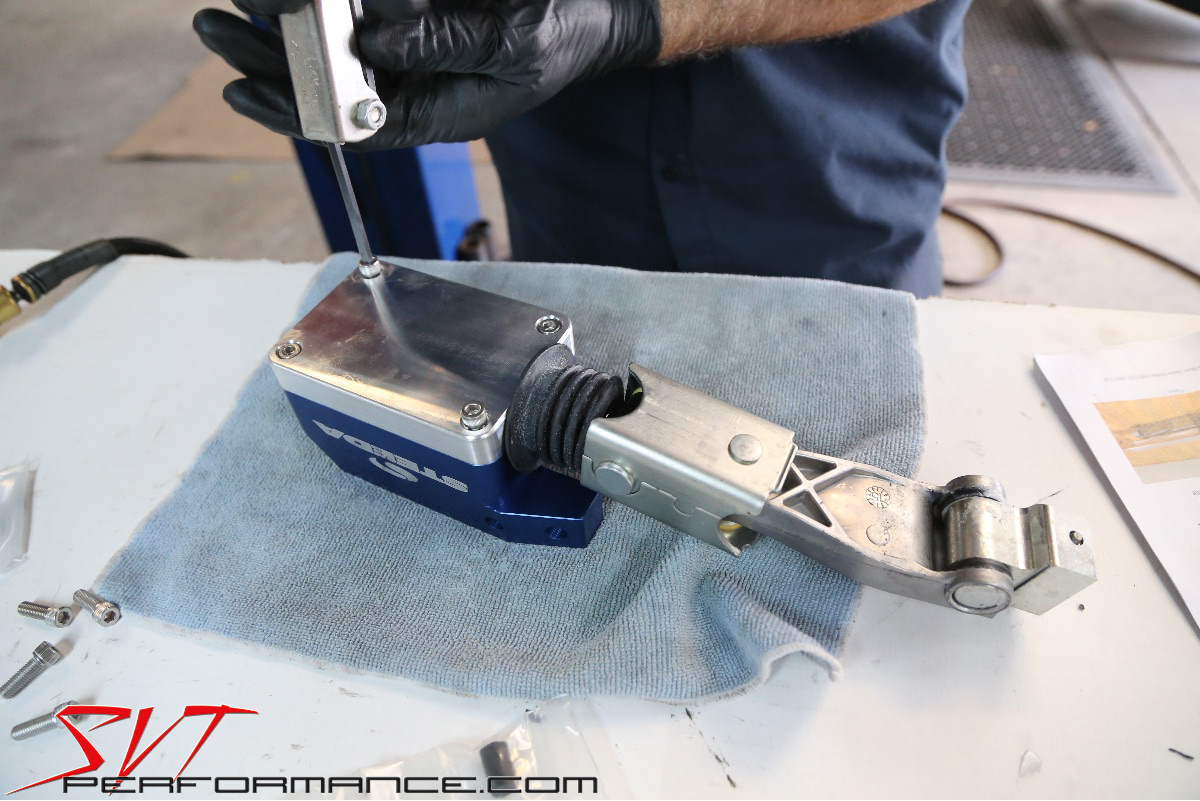 With the linkage in place Steve bolts on the billet lower base of the Tri-Ax. 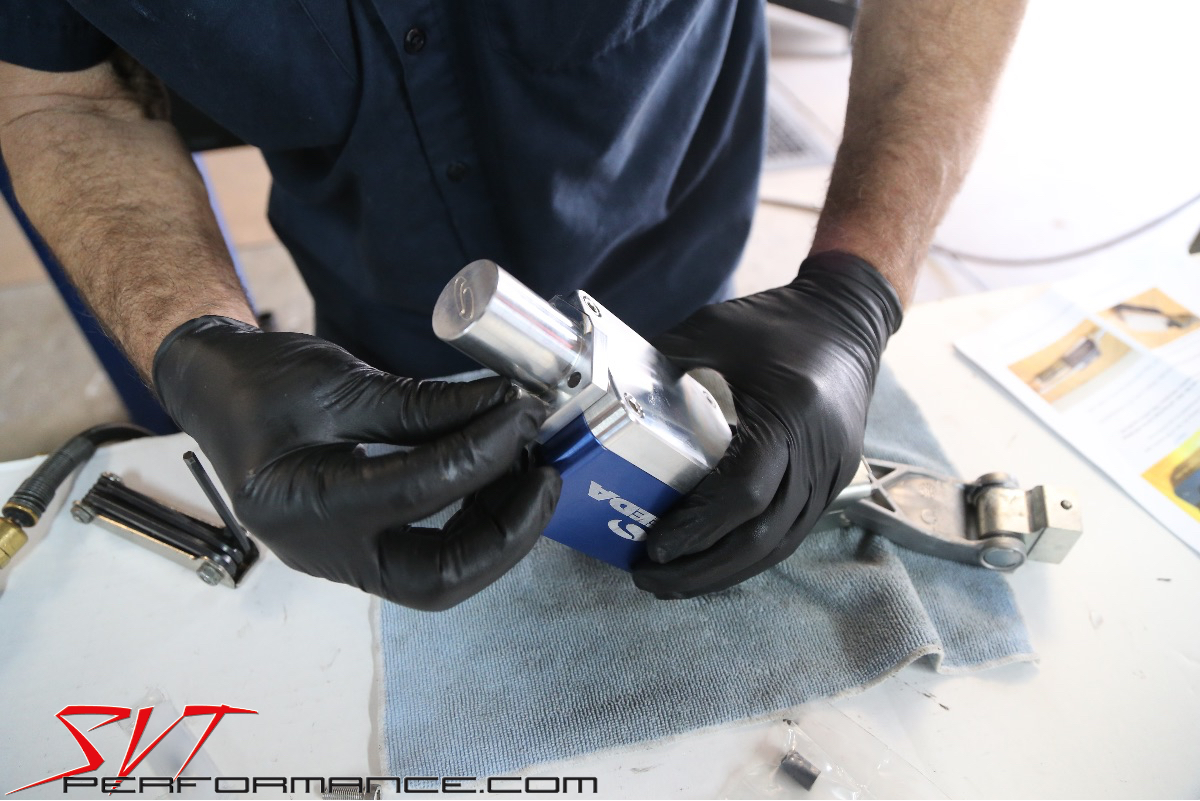 After installing the linkage, he bolt-ons on the rear shifter support. 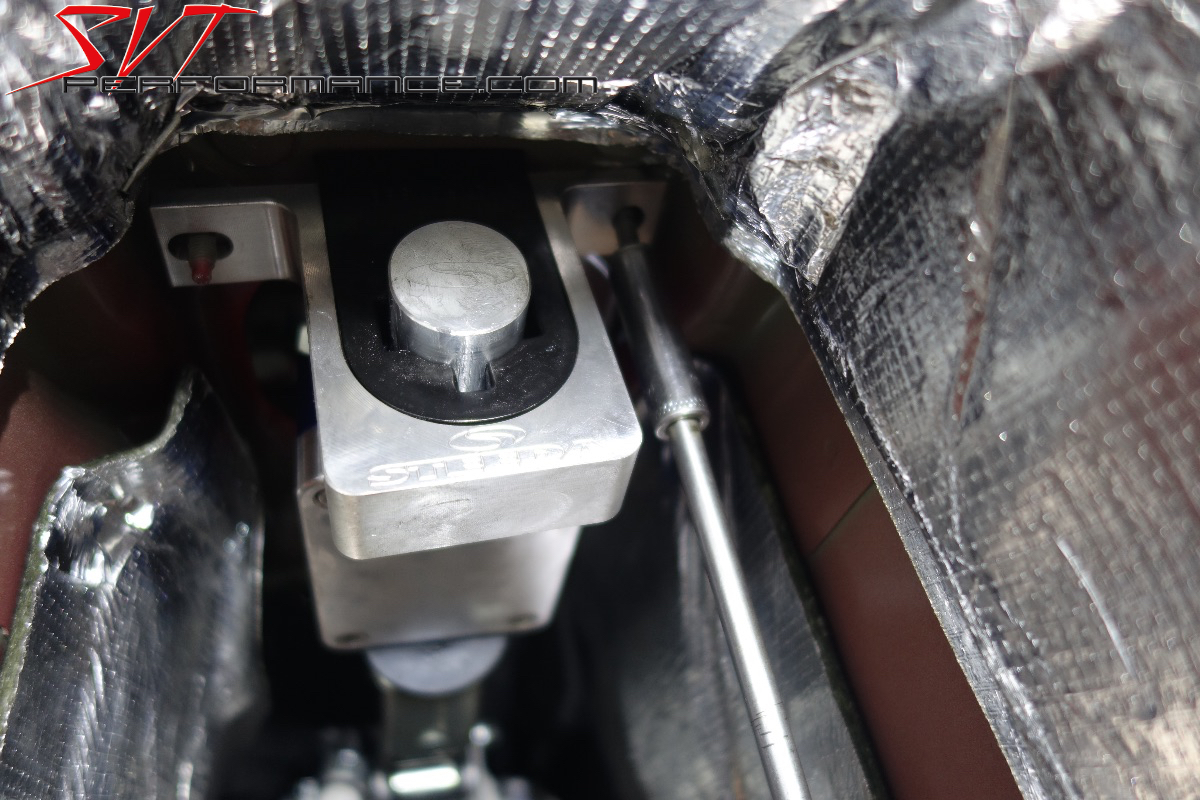 Since the lever installs from the topside, Steve can easily slide the Tri-Ax base and linkage into base. Then he bolts it to the transmission and installs the included billet shifter support, which features a higher-durometer urethane bushing to further solidify the shifter mounting. 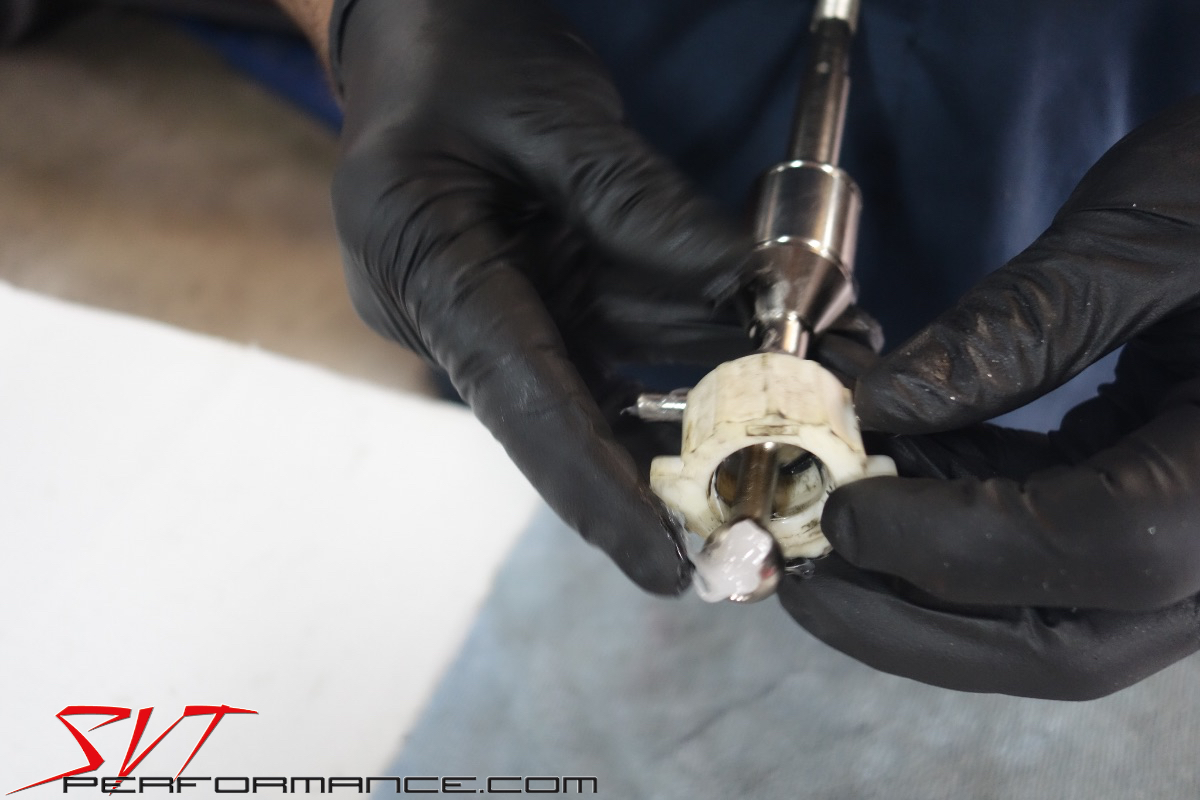 Steve then lubricates the lever balls and transfers the main shift ball pivot cup and bottom pivot cup to the Steeda Tri-Ax lever. 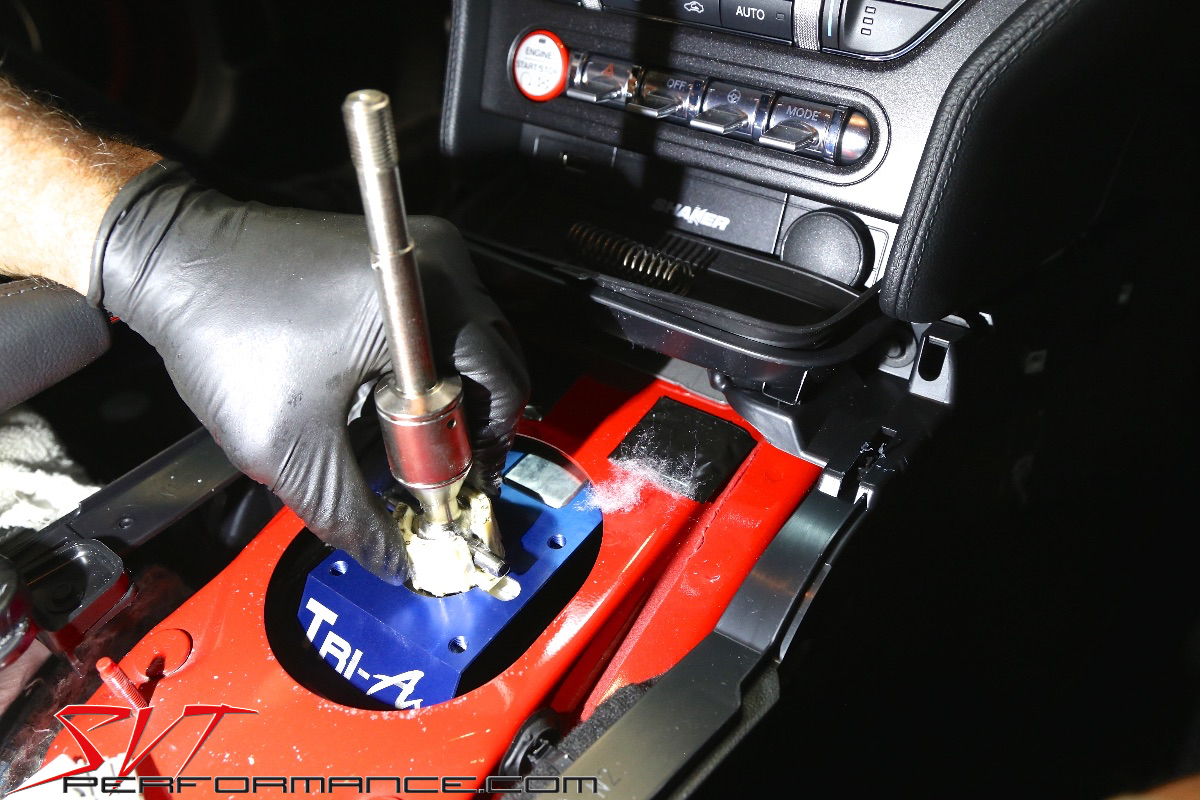 Slide the lever’s lower pivot cup into the cup in the shifter linkage until you feel it click into place. 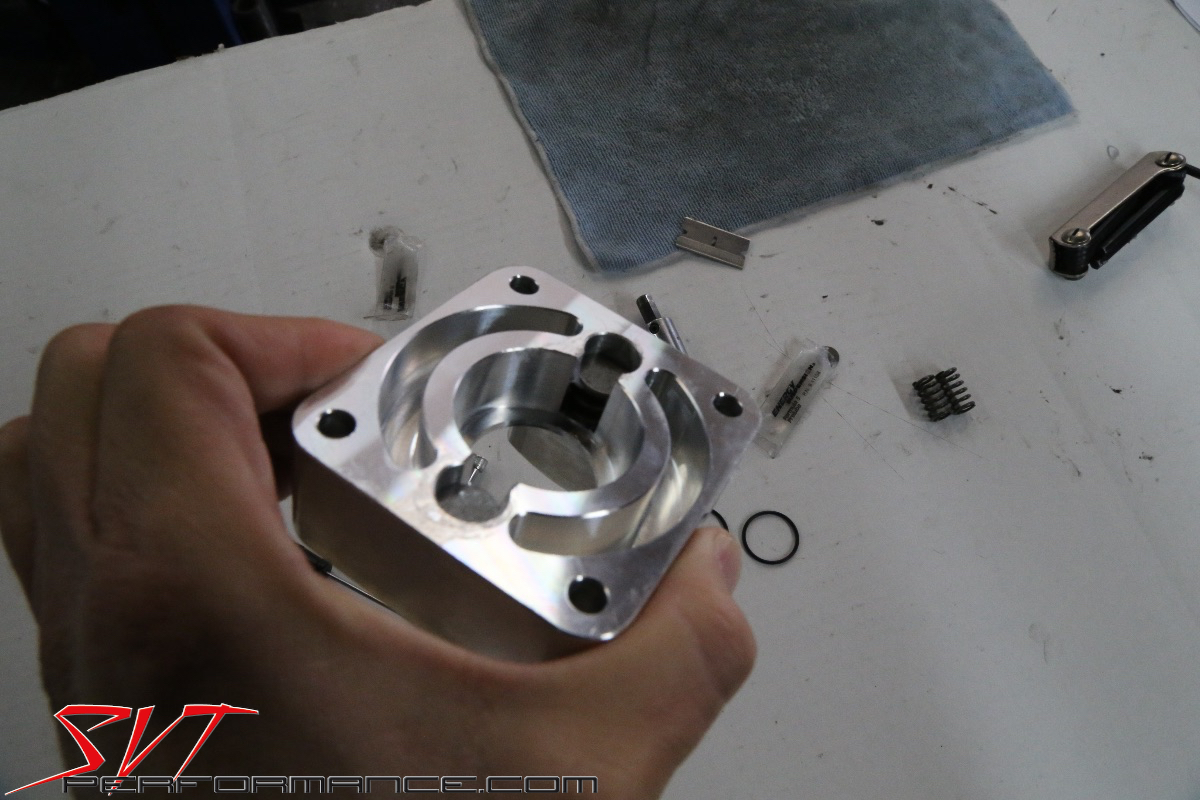 The Steeda shifter includes two medium-resistance springs and two high-resistance springs. You can chose to run a consistent spring rate on each side of the shifters or mix them for an offset tension to improve the precision of the all-important Second-to-Third shift. Steve chose the medium springs and lubricated them with silicone grease, which helps retain the springs and shims in the top plate during installation. 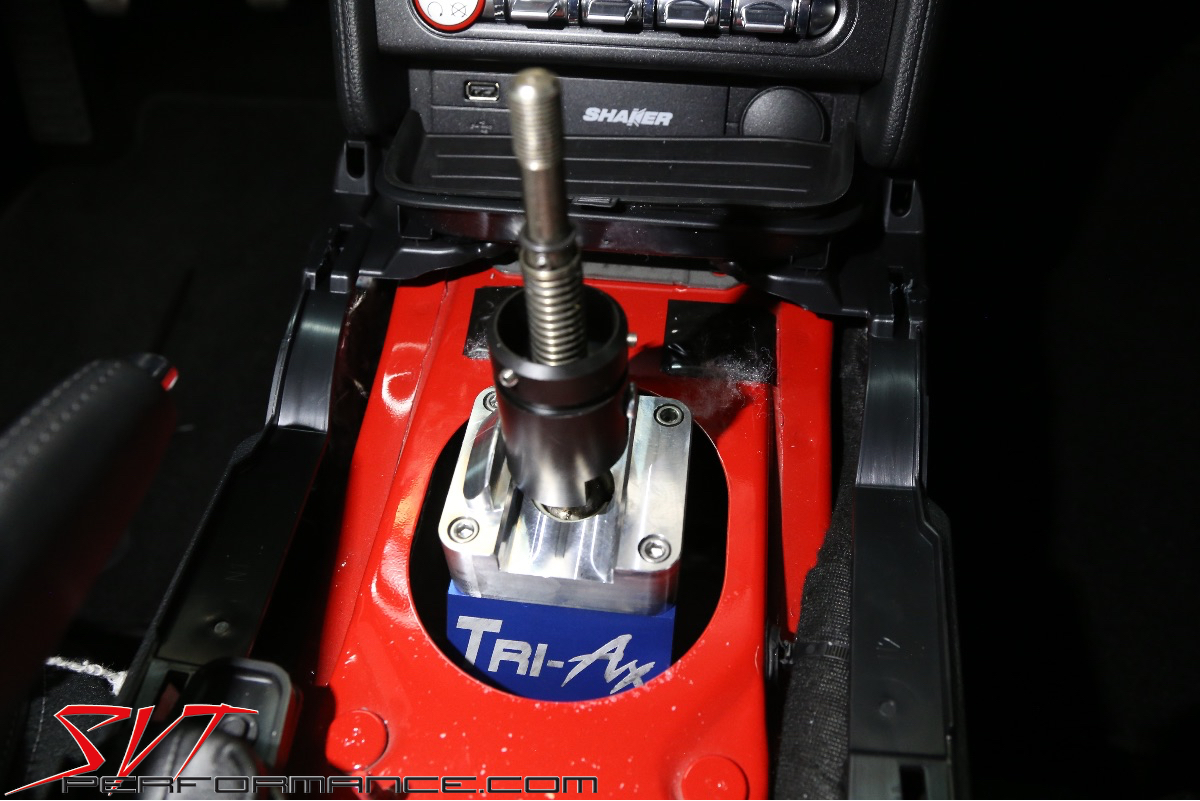 Steve then installed the top plate, bolted on the reverse lockout collar and installed the lockout spring. The latter is retained with two set screws rather than the pin used on the stock lever. 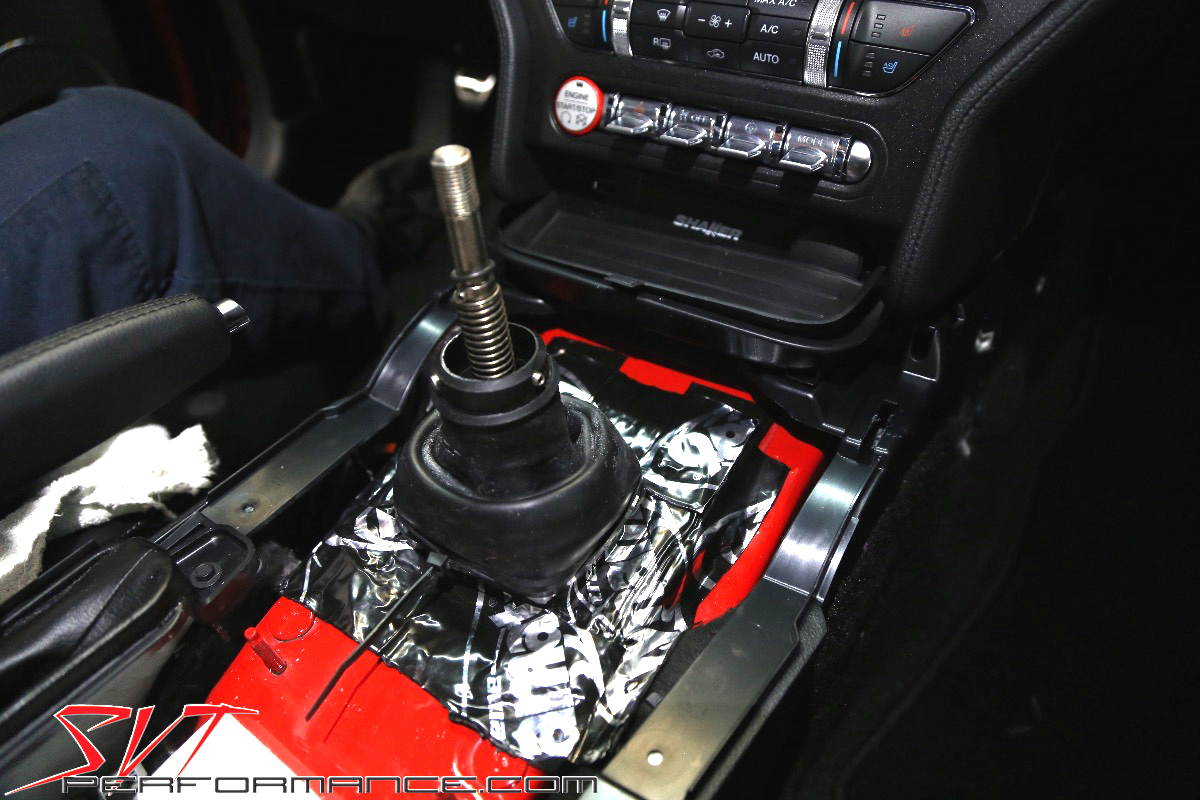 If you are one of those really discerning S550 owners, you might notice a bit more NVH from rugged Steeda shifter. However, the shifter does include a sheet of Dynamat, which you can cut and install around the shifter to help dampen sound and vibration from the transmission tunnel. You can then reinstall the factory sound deadener and reinstall the console, shift boot and knob. 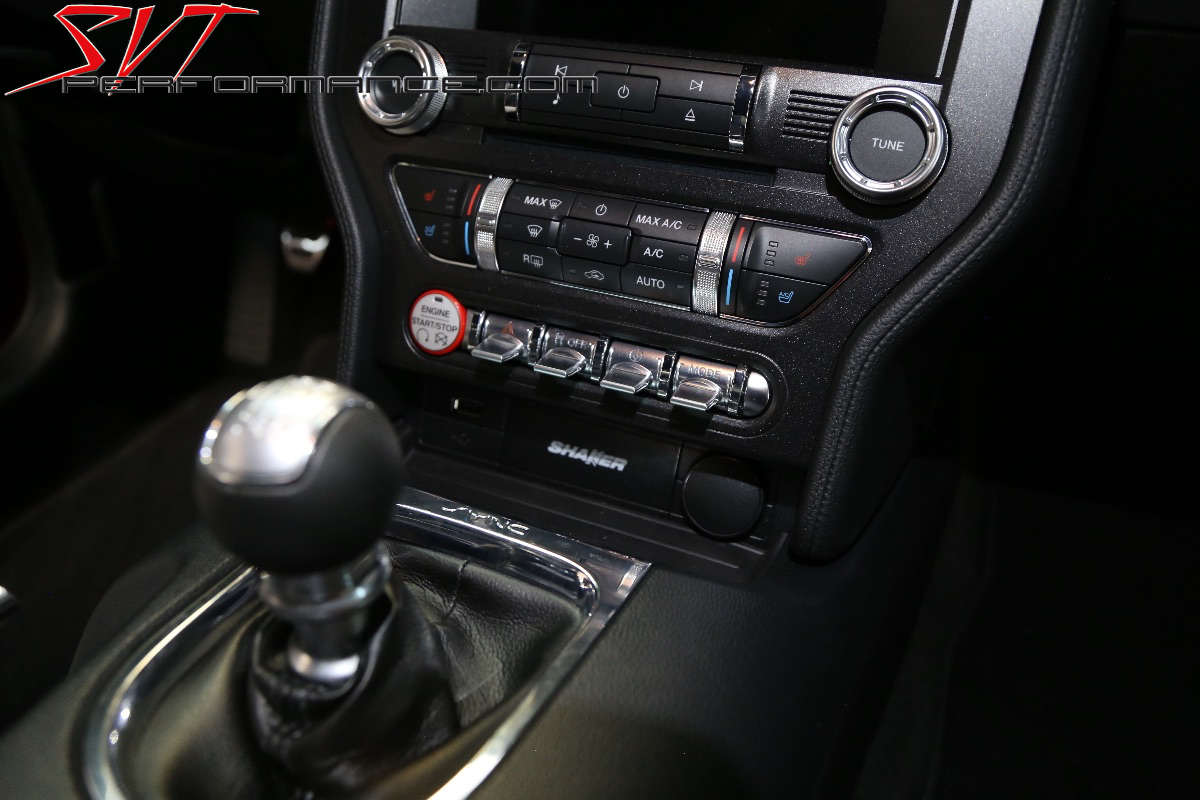 Here’s the completed installation. As you can see the lever sits lower than stock which makes it easier to power shift and do so quickly. Make sure everything shifts smoothly and works properly before you return under the car to put the rest of the car back together. 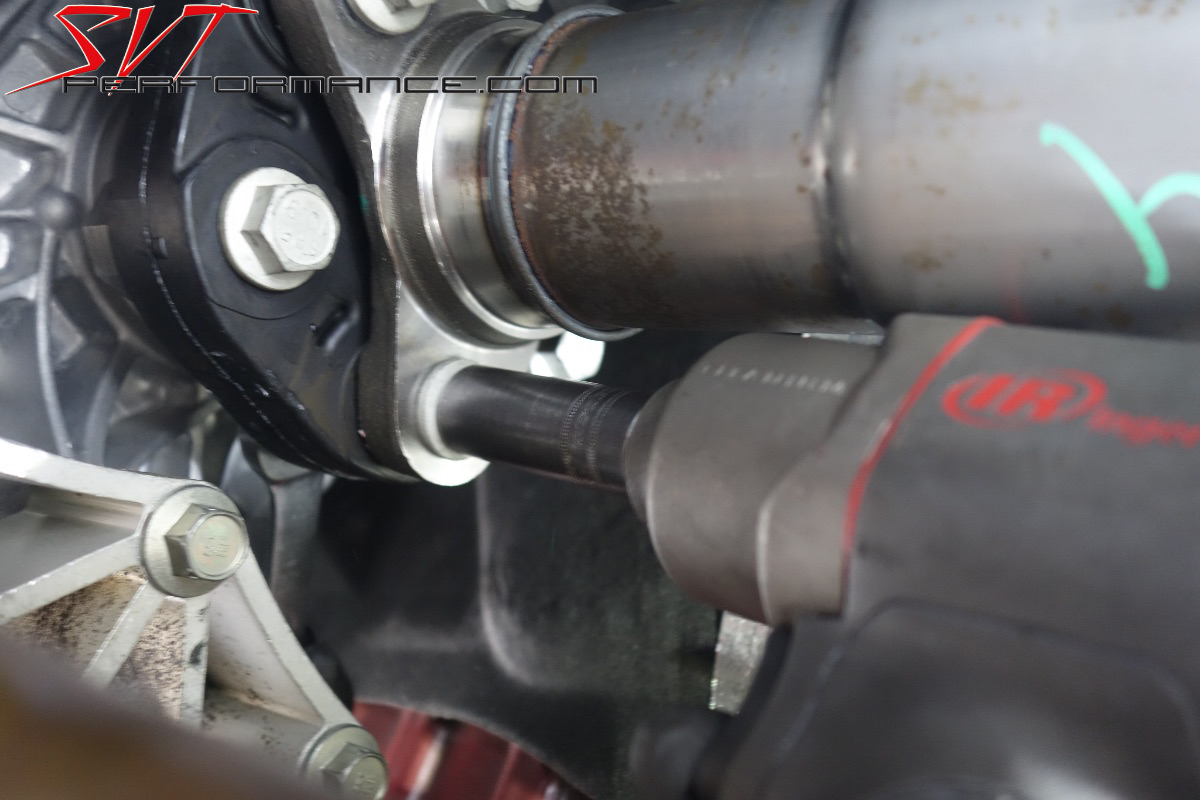 With the shifter bolted on and working fine, Steve went back under the car to bolt up the driveshaft, crossmember and exhaust to complete the installation. 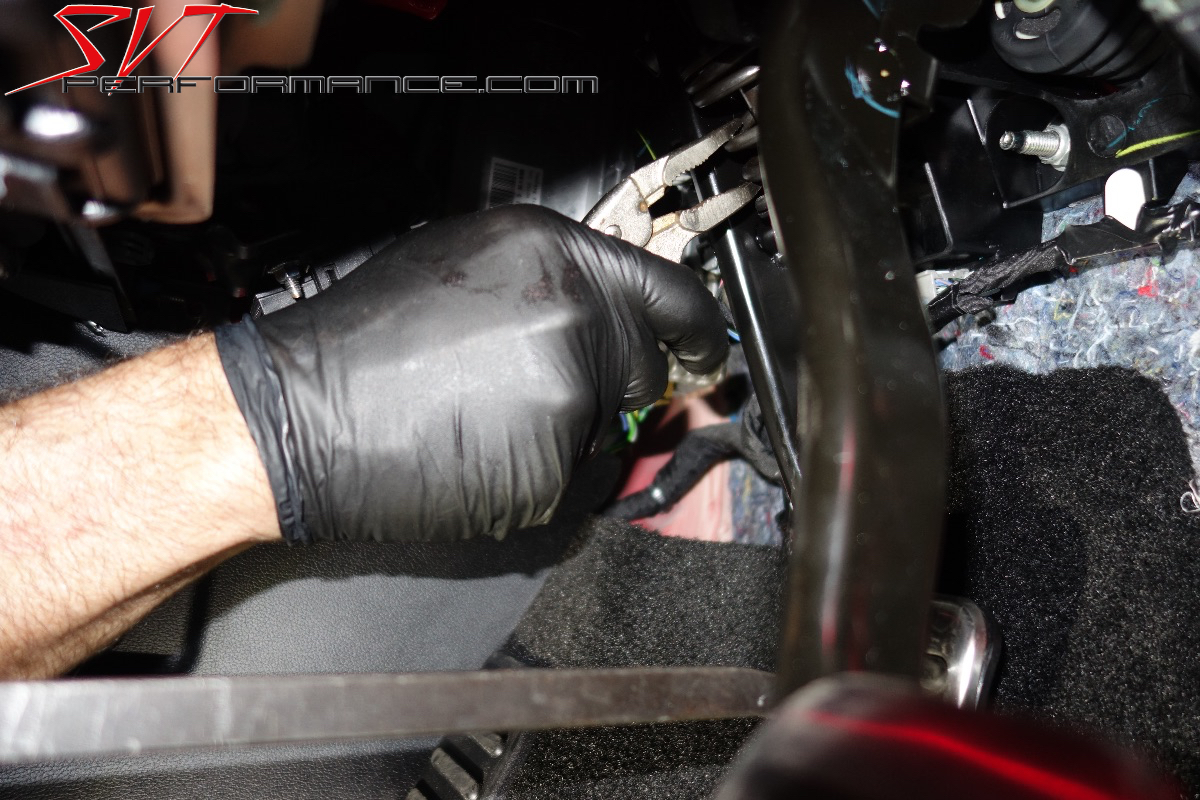 Moving under the dash Steve uses long screwdriver wedged between the clutch pedal and seat to depress the pedal to the floor. He then a compresses the stock clutch assist spring with a pair of locking pliers and rotates the perch out of its seat. Many people just remove the stock spring without replacing it, but Steeda says this will lead to premature wear of the seals in the OE slave cylinder. 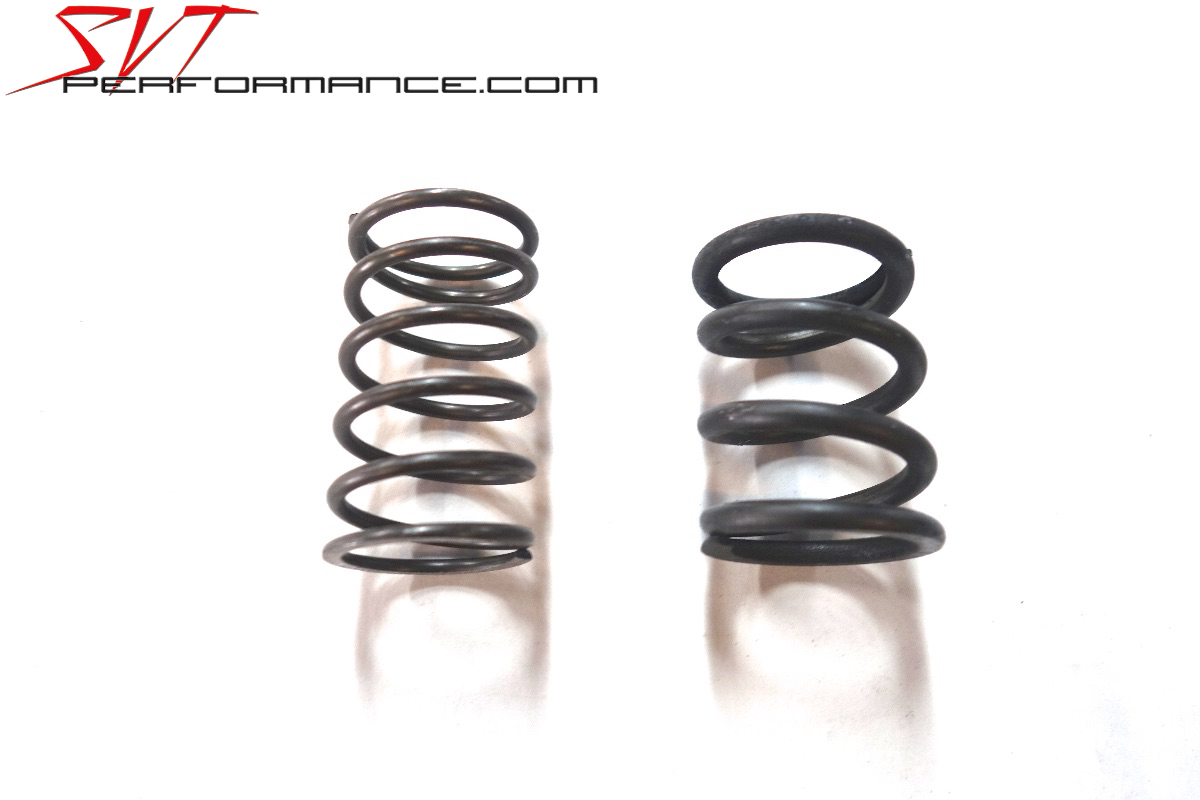 The 35 in-lb Steeda spring (left) supplants the 185 in-lb stocker to provide a more linear pedal feel than the stocker. Steeda’s unit is wound from piano wire, so it is said to provide a consistent rate with repeated use. 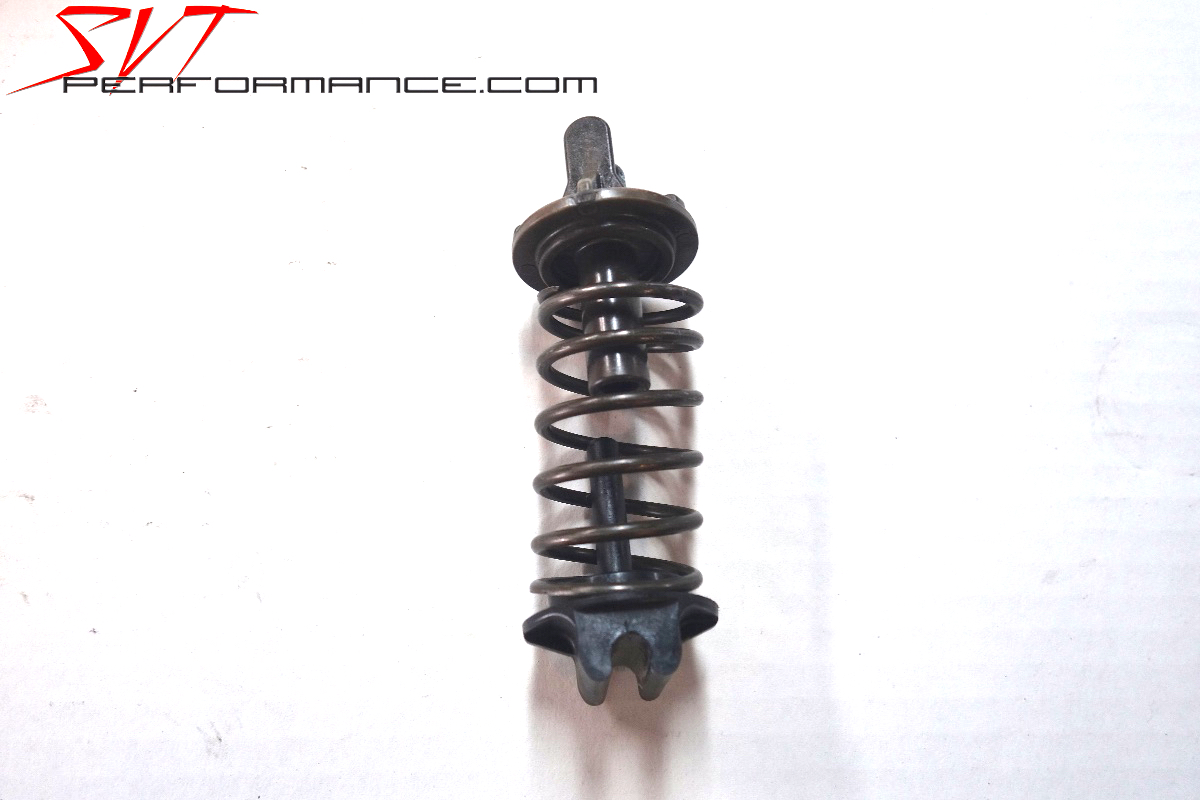 Of course you’ll need to transfer the spring perches to the Steeda clutch-assist spring (PN 555-7022; $9.95) before installing it. 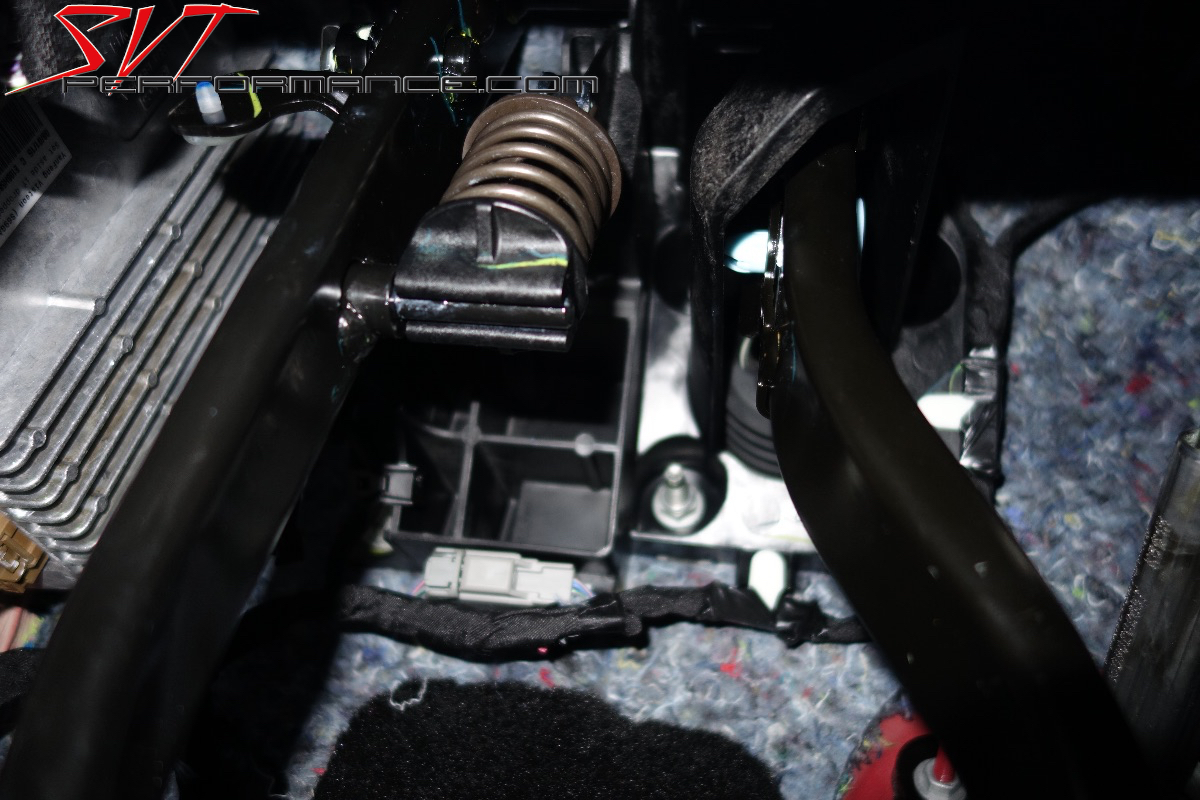 Place the bottom perch on the pin welded to the clutch pedal, compress the spring with your hands and install the upper perch on the channel on the pedal.